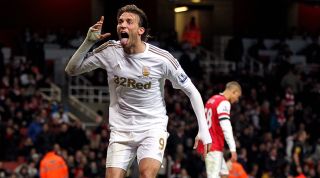 Former Swansea hero Michu has told FourFourTwo that previous links with Real Madrid and Barcelona were nothing more than paper talk – but admits that a switch to Arsenal may have been more realistic for his abilities.

The Spaniard made a flying start to Premier League life with the Swans in 2012-13 after joining from Rayo Vallecano for just £2 million, scoring six goals in his first eight top-flight matches.

In total, he plundered 22 goals in his debut campaign as the south Wales side bagged a top-half finish and finished the season with League Cup silverware.

SUMMER SALE Just £9.99 for the first six months with a FourFourTwo subscription

Speaking in the August 2020 issue of FourFourTwo – out now in shops and available online with free delivery – the Spaniard has admitted that high-profile links with the likes of Real Madrid and Barcelona were unrealistic, but suggested reported interest from the Gunners would have fitted better.

“That’s what the press said,” he said. “I’m not sure I could have reached either Barcelona or Madrid’s level.

“But at Arsenal, after 22 goals for Swansea, I could have offered something.”

Michu struck a brace against the Gunners in a memorable 2-0 win at the Emirates Stadium in December 2012 – a high point of his dream maiden campaign in England’s top flight.

Things began swimmingly in Swansea’s opening game of the season for Michu, who scored twice and assisted another in a 5-0 rout of QPR at Loftus Road. According to the man himself, such a remarkable start flew in the face of warnings from team-mate Angel Rangel.

“We were laughing on the coach back because he’d told me it was tough to win away from home in the Premier League, then on my first day we won 5-0 at QPR,” said Michu. “I was joking, saying that he was a liar and it was very easy!

“We won the League Cup [that season], knocking out Liverpool at Anfield and beating Chelsea 2-0 at Stamford Bridge in the semi-finals.

“I was lucky to play at Wembley – I joined Swansea for only two seasons, and it’s not normal to play at that stadium. Then we won the final 5-0.

“In a footballing sense, that was the best year I could have had. I scored 22 goals and lifted a cup at Wembley, then in the league we beat Arsenal at the Emirates Stadium and I scored twice. We also had a manager who was a legend, in Michael Laudrup.”

Michu eventually left on loan to Napoli in 2014-15, only for injuries to cruelly blight his career from then and force him into early retirement at 31.

QUIZZES Get stuck into a feast of footballing trivia on fourfourtwo.com

GUIDE Premier League live streams: How to watch every game on this week

Read the full interview with Michu in the August 2020 issue of FourFourTwo – featuring an exclusive cover interview with Dennis Bergkamp, 25 years on from his arrival at Arsenal. We also remember more era-defining icons, ask Djibril Cissé your questions, hear the confessions of Nile Ranger, remember when Celtic halted Ranger’s charge for 10 in a row, chat to Bayern’s Joshua Kimmich, mourn Atalanta’s season of muted celebrations and much more. Grab your copy in shops or online!