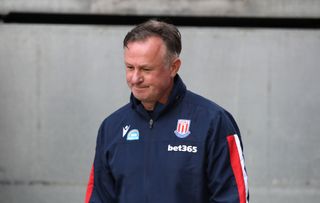 Michael O’Neill hit out at referee Jeremy Simpson after he waved away a late penalty claim in Stoke’s 0-0 draw at Millwall.

Substitute Jacob Brown went down under Shaun Hutchinson’s challenge but Simpson instead pointed the other way and booked Brown for diving.

It would have given Stoke a golden chance to win a dull contest, which featured just five shots on target.

The Potters had the better of it, with Tyrese Campbell and Sam Vokes both going close but they struggled to breakdown a stubborn Millwall defence.

“The referee has a decision to make and there is clear contact,” O’Neill said.

“Hutchinson comes straight into the back of Jacob and Jacob gets to the ball first.

“That for me constitutes a penalty and it certainly does not constitute a dive and a booking. I am disappointed with that.

“We felt it was a game that was going to be decided by something like that or a set-piece. I don’t think we ever looked like losing a goal, we were strong defensively.

“Our away form was poor last year. In this league, a draw is a good result away from home, wherever you are, so we’re not disappointed with the result.

“But with the nature of the game, we’re disappointed we did not do a little bit more. I felt we were the better team out there.”

O’Neill turned some heads by leaving last season’s player of the year, James McClean, out of his 18-man squad, as well as £12m striker Benik Afobe.

Both are in contention to face Wolves in the EFL Cup this week but O’Neill is on a mission to cut down Stoke’s bloated squad in the final weeks of the window.

“I have too many players, it’s as simple as that,” he said.

“We are trying to build a team here and when you do that, there are always casualties.

“The 18 players we picked today are the ones who have done the most in pre-season and deserve to be in the squad at this minute in time.”

Stoke could have done with McClean’s pace and trickery down the left in a game crying out for a bit of quality.

Sam Clucas’ close-range shot was smothered, while Campbell fired wide from inside the box as the Potters bossed much of the first half.

Millwall were better after the break but failed to create much, while Vokes dragged an effort wide from 20 yards for the visitors.

“Stoke are going to be a very physical team, the way they are set up this year,” said Millwall boss Gary Rowett – who had a seven-month spell in charge of Stoke two years ago.

“I just think it made the game very hard. You have to play the game, not the opposition and we didn’t do that.

“We matched them in the second half, got control of the game. I thought we were the better team, although not much better.

“We tried to get things going but it’s a testament to Stoke. They made it difficult.”