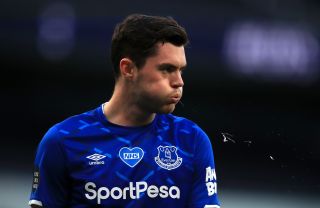 Everton defender Michael Keane has signed a new five-year contract with the club.

A club statement read: “Michael Keane has signed a new five-year contract with Everton, committing his future to the club until the end of June 2025.

✍️ | We’re delighted to confirm that @michaelkeane04 has signed a new five-year contract, committing his future to the Club until the end of June 2025.#EFC 🔵— Everton (@Everton) August 30, 2020

“Keane played every minute of Everton’s Premier League games post-lockdown last season, claiming a handful of man-of-the-match awards and maintaining an elevated level of performance he will employ as a benchmark when the new campaign kicks off in a fortnight.”

Keane made 31 top-flight appearances last term and became a regular following the arrival of manager Carlo Ancelotti in December.

He has made 94 Premier League appearances in total since joining from Burnley in the summer of 2017.

Keane told evertontv: “I have loved my three years at Everton and I’m looking forward to seeing what the future holds.

📺 | “It's time we started producing results on the pitch. We want to finish higher in the table than we did last year and get into Europe."@michaelkeane04 shares his ambition at #EFC under “one of the best managers there has been” in @MrAncelotti.— Everton (@Everton) August 30, 2020

“I’m learning every day on the training pitch with the manager and all his staff. They have been brilliant and really got across the way they want us to play.

“The manager is one of the best there has been. I’m hoping we can kick on this season and make the fans proud again.”

Keane has 10 caps for England after making his senior debut in March 2017 in a friendly defeat to Germany.

He added: “I want to keep improving and keep learning. My best years are definitely ahead of me.

“I’m working on things every day…striving to get better in every part of my game and, hopefully, I can show that.”