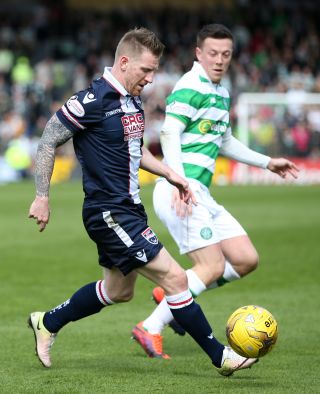 Ross County ace Michael Gardyne knows Celtic boss Neil Lennon well enough to know he will not be panicked by the Parkhead grumbles.

It has not been plain sailing for the Hoops so far having begun the final leg of their quest to claim 10 titles in a row this season.

The champions slipped up with a draw at Kilmarnock and were forced to leave it late to claim victory over Dundee United on their last trip on the road.

But the groans that followed those two performances were nothing compared to the wave of criticism that crashed down on Lennon and his players after they were swept out of the Champions League qualifiers by Ferencvaros.

Now County are aiming to heap fresh frustration on Celtic on Saturday when they welcome Lennon’s team to the Global Energy Arena, looking for a win which would take them above the Glasgow giants.

But playmaker Gardyne – who was breaking through the Parkhead youth ranks when Lennon was still captaining the club – knows his old friend is not the type to over-react in a crisis.

He said: “It’s the usual from the fans. The supporters at Celtic and Rangers have got such high demands.

“I know Neil Lennon quite well and I can imagine the demands he places on his dressing room are even higher than those they get from the fans themselves.

“There will be no panic down there.

“They’ve got a couple of games in hand and I’m sure they’ll be thinking they can do OK this season.”

Saturday’s showdown is set to see the return of fans to Scottish football, with 300 members of the Staggies support trailing the Dingwall outfit’s coronavirus safety protocals.

Gardyne is delighted to see this first small step being taken down the road towards normality.

But he is not expecting the tiny band of supporters to make the difference as his team look to upset the odds against Celtic.

He said: “I think it will be nice. Obviously it’s all been a bit weird playing without fans.

“Can it give us a lift? Possibly it could, but then we’re playing Celtic at home. I don’t think you need much more lift than that.

“It may be a little bit of a positive that they won’t have their normal backing but we’re facing Celtic at home and if you can’t get yourself up for that then I don’t think you should really be playing football.

“It can be difficult when they bring that big support as they can almost suck the ball into the net at times.

“But then again, when the likes of Celtic, Rangers or Aberdeen come up and fill that stand behind the goal, it’s brilliant as those are the type of games you want to play in.

“So I don’t think those games are more difficult. The one this weekend will be just as tough.

“I’ve not really felt any lulls through the game because of the lack of atmosphere. At the end of the day it comes down to the players on the park to bring that tempo and I’ve tried to be the guy who gives our team that lift.”