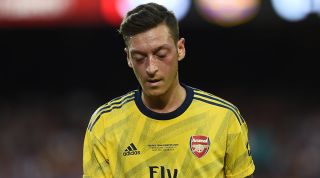 Mertesacker now heads up Arsenal's academy and is responsible for instilling the Gunners' youngsters with the kind of hard-working ethos that earned him a career at the highest level for 15 years.

But, as reported by the Mirror from the former player's new book, Mertesacker has admitted that he struggled with one particular senior player's attitude during his playing days.

The German said of his compatriot Ozil: "First of all, he loves playing football. It doesn’t come across so often.

"He is a genius in terms of what he can produce with the ball, you can see that in every training session.

"Once he gets the ball, he’s rested. He thinks he is playing in the park. He can deliver the ball that no one else can deliver. He has got that magical sense.

"But he's not the kind of guy who approaches people and says, ‘You need to do this, that and that’.

"He’s a different character and sometimes I struggled with that. Sometimes I was really pissed with him for days and weeks.

"But he delivered magic moments for us, moments when you thought he could go to another level."

Ozil is yet to feature for Arsenal competitively this season, although he and Sead Kolasinac were given leave after being attacked and threatened near their homes in north London.