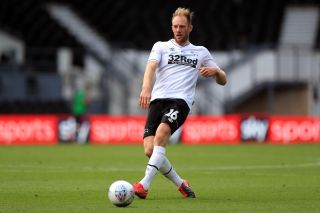 Brighton defender Matt Clarke has returned to Derby on another season-long loan.

The 23-year-old was farmed out to the Sky Bet Championship side last summer, shortly after joining the Seagulls from third-tier Portsmouth.

Clarke won Derby’s Player of the Season award during an impressive loan spell and will now return to Pride Park for the 2020-21 campaign.

Rams boss Phillip Cocu told the club’s website: “I am extremely pleased that we have got Matt Clarke back after the great season he had with us.

“Especially in the second half of last season, he was excellent and the progress he made was huge after he had to adapt to a new way of playing with us.”

Brighton technical director Dan Ashworth said of departing Clarke: “Matt was a standout player in the Championship last season and this move will help continue his development.

“We will keep a close eye as he looks to build on the excellent progress he made last season and we wish him well for the season at Derby.”