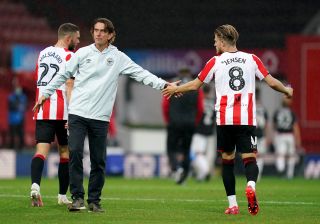 Brentford midfielder Mathias Jensen was buzzing after hitting form at the right time to help the Bees to the Sky Bet Championship play-off final.

The west Londoners are now just one match from promotion to the Premier League after Jensen’s starring role in the 3-1 second-leg win over Swansea.

The Dane suffered an injury early in the restart and admitted he had struggled to get up to speed with the games coming thick and fast.

But Jensen’s display against the Swans, the highlight of which was the stunning 50-yard through-ball to set up Ollie Watkins for the opening goal, prompted manager Thomas Frank to name him man of the match.

“It was a knock to me to get another injury after the coronavirus break, I was disappointed with myself and my performances,” Jensen told the club website.

“I was injured before the break and I had to get going again. But I expect so much of myself, so it was good to help the team.

“I took a touch inside and always try to look for the long pass, and I saw Ollie was open. It’s not every time that pass gets there, but it did!

“Of course we are very happy, we wanted to bounce back from some disappointing results, it was about time, and we did that.”

When Emiliano Marcondes headed in the second Brentford had wiped out Swansea’s 1-0 first-leg lead in just 15 minutes.

Bryan Mbeumo volleyed in a third just after half-time before a Pontus Jansson mistake let in Rhian Brewster.

Yet even though Swansea only needed one more goal to force extra time, there was little or no alarm in the Brentford penalty area over the final 15 minutes.

“We know we have a very good defensive side,” added Jensen. “Everyone is defending, Ollie and Bryan were still sprinting around and that helps us behind them.

“Mistakes happen, of course, but it’s not very often we concede more than one goal.

“We’ll enjoy this moment and then we will think about Wembley. It’s a huge stadium, a fantastic stadium. I’ve been once to watch a game.

“It’s a shame there will be no fans there – but hopefully we will win and get another opportunity with the fans.”