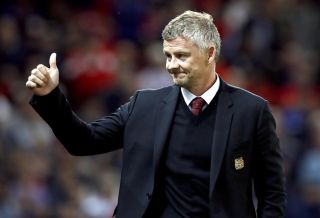 Few expected the Red Devils to come a cropper against the champions of Kazakhstan, yet an embarrassing result was looking increasingly likely as the hosts toiled after a bright start.

Greenwood eventually saved United’s blushes in the second half, showing excellent footwork and finishing as the 17-year-old became the first player born this millennium to score for the club.

The strike secured a 1-0 win against Astana in Thursday’s Group L opener and justified the faith shown by Solskjaer, who called the teenage forward one of the best finishers he has ever seen on the eve of the game.

“To get him inside the box, you know something’s going to happen,” the United boss said.

“He can go inside, he can go outside. A great finish through the legs of the keeper. Most of the time that’s quite open.

“As I said yesterday he knows how to hit a ball. Maybe he hit too hard in the first half, where he should have curled it a little bit more in the top corner.

“But he showed glimpses today of what he can become.”

Put to Solskjaer that you have to be brave to play a 17-year-old having not replaced high-profile players like Sanchez and Lukaku, the United boss said: “For me, it was the right decision.

“Because I think for the club and for him, I think he’s going to be important for us this season.

“He’s not played a lot so far but he’ll get his minutes and he’ll grow and develop.”

Greenwood’s growing influence looks set to be rewarded by United with a deserved new and improved contract soon enough.

“We’re always in talks with the boys, how we see the future,” said Solskjaer, who saw David De Gea and Victor Lindelof extend their deals this week

“And Mason is obviously one we want to keep with us.”

Contract talks are also surely due with Tahith Chong and Angel Gomes after the teenage pair made their first United starts against Astana.

The squad’s youthful exuberance led to a promising start to the Group L clash, but the way it tailed off leaves Solskjaer with plenty to think about.

“When you don’t score in the first half from four or five massive chances, you’re always wondering if it’s one of those nights that you’re going to get punished for being sloppy,” he said.

“But then again their keeper did well, he made some fantastic saves.

“I didn’t feel confident that we’re going to win the game until the referee blew his whistle.

“So, I don’t think we played the last 10-15 minutes out well after we scored and that’s something these boys need to learn as well.”

Meanwhile, Astana midfielder Runar Mar Sigurjonsson – a United fan that Solskjaer tried to sign during his time as manager of Molde – was proud of the visitors’ plucky display at Old Trafford.

“We did well and made it difficult for them,” the Iceland international said.

“We had a couple of chances too, but it wasn’t enough to get the point in the end.”