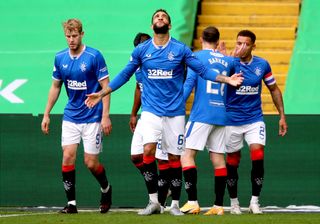 Old Firm hero Connor Goldson hopes Rangers’ 2-0 victory at Celtic can act as the springboard to take Steven Gerrard’s team to the title.

The Ibrox defender was the unlikely match-winner for Rangers as he scored once in each half to hand the visitors the victory.

The Light Blues have now recorded back-to-back wins at Parkhead for the first time since 1995.

But Goldson – whose team now hold a four-point lead over Neil Lennon’s champions having played a game more – is determined his team will not slip up like they did last year following their December triumph.

The Englishman told Sky Sports: “It’s so early in the season – only 11 games played. We’ve got the European game on Thursday then we’re at home next weekend (against Livingston). We just need to get another three points and keep progressing as best we can.

“We didn’t do ourselves justice when we won here last season after coming back from the break.

“We were poor. We didn’t look half the team we did before the break. Hopefully this now gives us the confidence we need to put a big run together.”

Goldson headed home from a James Tavernier free-kick nine minutes into the first half then repeated that feat just as early in the second as he prodded home at the second attempt.

He added: “It’s massive. Old Firms are always massive games and we knew we had to start well, we had to score first and we had to defend well as they are a good team.

“But I thought we did everything right today. We controlled the game, controlled our box and limited them to a few chances – and we got two goals.

“I was happy with the first goal and the second goal I was happier because at 1-0 you know anything can happen but at two it settled down a wee bit.

“Then we were at our best in the game, keeping the ball and playing on the counter-attack.

“We’ve worked on the shape for two years now. We’ve played against some top teams with that same shape.

“The new lads have bought into it and it’s always seemed to work for us in big games.

“We know what we’re doing and we limited them to not many chances.”

“Niko Katic was the hero here last year but Connor deserves the headlines because he led us from the back.

“He should enjoy his night – we all should. But then it’s back to business after our day off.

“I just said to the players they deserve to enjoy their night but there will be no getting carried away. We need to stay humble and on we go.

“But it is different (to December’s win) because last time we had a break which maybe ruined our rhythm and fluidity.

“I think the players are certainly showing more maturity but we’ve still got an awful lot more hard work to do. We have respect for the team we’re chasing. It was a really mature, experienced performance today but we need more of that from now until the end of the season.”

Hoops boss Neil Lennon told Sky Sports: “They were two poor goals from our point of view. One is from a set-play and the second is from a second phase to a set-play.

“We missed a great chance to equalise and goals change the psychology of a game.

“We didn’t have enough sharpness today and the boys coming off the bench didn’t have the impact we hoped for.

“We have to take this result and start to build for better.

“We had Ajeti not fully fit, Griffiths not fully fit, Edouard out. That’s three mainline strikers not able to start but I felt we created good enough chances first half to score. Rangers defended their box pretty well today and that was the difference in terms of the psychology of the goals.

“We were pretty decimated with the Covid and the injuries but I felt we had a strong enough team out.”