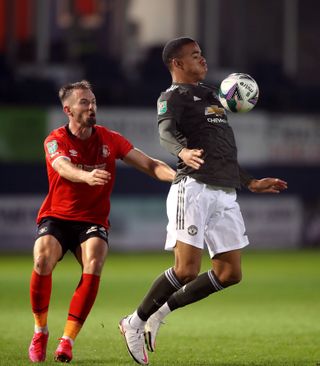 The England international was introduced late on alongside Marcus Rashford and Bruno Fernandes as United struggled to see off their Sky Bet Championship hosts.

Juan Mata’s penalty on the stroke of half-time was all that separated the sides before both Rashford and Greenwood struck late on to seal a flattering 3-0 victory.

Greenwood will be pleased to get his goal tally up and running for the season as the 18-year-old looks to move on from an off-field incident in Iceland which saw him sent home from international duty for breaching Covid guidelines.

Solskjaer was full of praise for the forward but has urged Greenwood to improve his heading ability as he looks to shape his all-round game.

“He had a fantastic season last season,” Solskjaer said after the game. “To get his goal was important for him, and Marcus, it is always nice for strikers to get that confidence and that feeling of scoring – to get that hunger again.

“He can play through the middle, I think as a young boy – not physically grown yet, sometimes it is nice to be facing forward instead of being the foil and being the battering ram.

“I scored most of my goals from just outside the posts as well, I wasn’t in the middle.

“For him to be a number nine, though, he needs to learn how to head a ball. I keep telling him that and if he wants to do that he is welcome to come and practice with me.”

Solskjaer conceded he did originally plan to introduce his trio from the bench but felt Luton pushed his side hard as he looks to get his players back to match sharpness.

“It wasn’t planned for them to play,” he said. “I don’t plan ahead that much, you just see wherever you have to to make changes.

An entertaining night in the #CarabaoCup, and more on the way tomorrow!#EFLpic.twitter.com/ZliH4ApTKc— Carabao Cup (@Carabao_Cup) September 22, 2020

“They have a decent training session tomorrow so I didn’t want them to play too much.

“The levels in English football are getting better, that was their cup team as well so the standards are high in the Championship. They have done well and made us work hard to go through.”

I’m gutted that I can’t finish what we started this season. To experience the love shown to me in such a short time was extra special and it will not be forgotten. I want to thank and wish all the players and staff the best of luck against Sevilla. DAJE ROMA! 💛❤️ 🐺 pic.twitter.com/9vHfpWUNsz— Chris Smalling (@ChrisSmalling) August 4, 2020

But even with all the rotation, there was no room in the United squad for Chris Smalling.

The England defender spent last season on loan at Roma and looked set to return there on a permanent deal but Solskjaer revealed the club are waiting for what they consider to be an acceptable offer from the Serie A side.

“At the moment we have not had any bids up to the level we want, that is the situation at the moment,” added the Norwegian.

“It is not down to me, I’m not the one negotiating between the two clubs but we haven’t had sufficient bids so that is it.”

Luton, too, made nine alterations and manager Nathan Jones felt it was an acknowledgement of his team’s performance that Solskjaer felt it necessary to introduce his big hitters.

“Then they bring a minimum of £150million off the bench, you leave yourself a little bit open.

“I think they needed that cushion and bringing those three on, once they turn the ball over, they murder you.

“It shows we are in a good place. I’m sick actually because 3-0 flatters them slightly because it looks like a comfortable win – but it was anything but.”