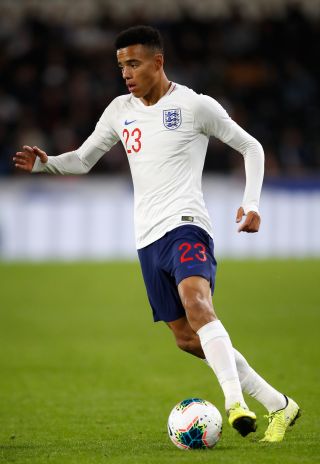 Manchester United teenager Mason Greenwood is ready to compete with the country’s best after his stunning breakthrough season led to a dream first England call-up.

No teenager has ever scored more goals in a single campaign for the Old Trafford giants than the 18-year-old, whose 17-goal haul in all competitions put him level with George Best, Brian Kidd and Wayne Rooney.

Such performances saw Greenwood establish himself as part of Ole Gunnar Solskjaer’s first-choice attack by the end of the season, with his fine displays across the frontline leading England manager Gareth Southgate to call him into the senior squad for the first time.

“It’s a dream come true,” Greenwood said. “Playing for England and being selected for England is every young boy’s dream.

“I’m privileged and I’m obviously honoured to be selected because it’s a good group of lads and I’m just happy to be here.

“I got the call, I was at home with my dad I was over the moon, I was excited. I just couldn’t wait to be here.”

Greenwood said his father, as always, helped keep his feet on the ground after receiving the call from Southgate – a mindset that has helped during a whirlwind period.

“It’s happened quick,” he said. “You can be called in any time and I was called into some Europa League games early in the season and I took my chance.

“I’ve just taken every game as it came and I’ve just been out there playing my football.

“Obviously I’ve got a good group of lads there helping me so it’s all good.”

Greenwood has not had time to take it all in at United or be overawed by anything, with the teenager planning to approach England in the same way.

“I feel ready to compete with anyone, really,” he said. “Like in the league, just going out there with a smile on your face and just playing football, really. That’s what it is all about.

“Obviously we’re an England team here and it’s good that everyone’s pushing for places and stuff.

“It makes the training better, obviously it makes the games better, but we’re a team here so it’s just how it is.”

Greenwood looked assured in his first ever press conference, even when faced with questions about the likes of Lionel Messi and Harry Maguire.

The 18-year-old, understandably, said it would be great to be on the same pitch as the Barcelona star but kept schtum when a potential move to Manchester City was mentioned.

“It’s really not for me to say,” the teenager said. “Harry is a good lad and I’m looking forward to seeing him back at the club once I finish this international break.”

It was a mature answer from a teenager who has been praised to the hilt, with all-time Premier League top scorer Alan Shearer already tipping him to break his record.

“Obviously it’s nice to hear that and obviously he’s been a legend,” Greenwood said.

“He’s done it all in the league and he’s been good at England as well, so for someone like that to be saying that about me is nice to hear.

“But as I was saying before, it’s all about keeping level-headed and staying focused.”

That focus is on England matters for now, with the Nations League matches in Iceland and Denmark fast approaching.

Greenwood is looking forward to training and playing alongside “role model” Harry Kane, while he called United team-mate Marcus Rashford – who had to pull out of this squad with a knock – his main influence.

“I’d say Marcus, really, to be honest with you because he’s come through the same pathway as I have at the club,” the teenager said.

“He’s helped me a lot obviously and he’s done the same – he’s been in my position and knows how it feels.

“It’s nice to have someone like that and someone to look up to but also I play with him as well which is another bonus.”