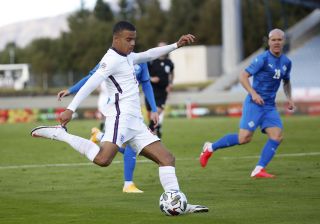 An apologetic Mason Greenwood insists he has learned a lesson after a breach of coronavirus regulations resulted in him being sent home from England duty.

The 18-year-old Manchester United striker and Manchester City’s Phil Foden, 20, were both removed from Gareth Southgate’s squad ahead of the Nations League match against Denmark after allegations emerged in the Icelandic media that the pair had spent time with two girls during the trip to Reykjavik, where both players made their senior debuts in a 1-0 win over the hosts on Saturday.

Southgate said it was a “very serious” breach of their bio-bubble in Copenhagen and the Football Association has launched a full investigation.

“Having now had the chance to reflect on what’s happened, I can only apologise to everyone for the embarrassment I have caused,” Greenwood said in a statement.

“It was irresponsible of me to break the Covid-19 protocols which are in place to protect players, staff and the public.

“In particular, I want to apologise to Gareth Southgate, for letting him down, when he had shown great trust in me.

“Playing for England was one of the proudest moments in my life and I only have myself to blame for this huge mistake.

“I promise my family, the fans, Manchester United and England that this is a lesson I will learn from.”

On Monday United released a statement saying: “We are liaising with the Football Association and are disappointed with the actions of Mason Greenwood over this situation.”

Reykjavik Metropolitan Police confirmed on Tuesday that the players had each been fined 250,000 Icelandic krona (approx £1,370) and that they considered the matter over.

A short police statement read: “The case is closed. Those involved were fined 250,000 Icelandic krona each.”