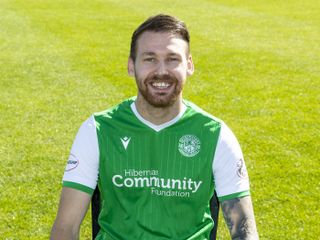 Martin Boyle has followed wife Rachael by committing his future to Hibernian after signing a new three-year deal.

The in-form winger has been attracting interest all summer, with Celtic rumoured to be leading a list of suitors.

But the Australia international has delighted Easter Road boss Jack Ross by pledging himself to the Leith cause just 24 hours after his other half Rachael agreed her own contract extension with Hibs’ women’s line-up.

Boyle has been a major success since moving to Edinburgh initially on loan from Dundee in January 2015, helping the club to finally end their Scottish Cup hoodoo 18 months later.

He told the Hibs website: “I’m really pleased to have signed the new contract and it’s no secret what the club means to me and my family.

“It was only yesterday that Rachael signed her own deal with Hibernian Women, and it was an easy decision for the pair of us to make.

“I was in the away dressing room at Easter Road earlier for some photography. The last time I was there was 10 years ago as a Montrose player. It’s been some journey since, and I still think my best years are ahead of me.

“I had some really positive conversations with Ron, Leeann, Graeme and the gaffer and it should be obvious how much we’re all enjoying our football just now. The results probably speak for themselves.

“We’ve given ourselves something to build on for the rest of the season and I’d love to add a few more highs to the ones I’ve already enjoyed.”

Ross said: “I’ve said often enough how much I value Martin’s contribution to the team, but I think that extends to the whole club.

“He’s a larger than life character. It’s easy to dismiss that as a laugh and a joke but it’s the kind of thing that can pull others along when the going gets tough.

“Martin also works incredibly hard on his game and that shouldn’t be overlooked. He’s matured into a player of real quality.”