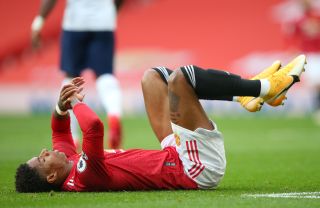 Manchester United forward Marcus Rashford has vowed his side will improve after Tottenham inflicted their joint highest Premier League defeat with a 6-1 win at Old Trafford.

Rashford said there were “no excuses” for the performance while under-fire manager Ole Gunnar Solskjaer confessed it was his worst day in football.

Ten-man United, who had Anthony Martial sent off, have endured a poor start to the campaign and sunk to a new low as Jose Mourinho’s men ran riot at Old Trafford to darken the club’s already bleak mood significantly.

Solskjaer, whose position will surely now come under scrutiny after this embarrassing loss, saw his side capitulate after going in front inside two minutes through Bruno Fernandes’ penalty.

Son Heung-min and Harry Kane scored two each, with Tanguy Ndombele and Serge Aurier also getting on the scoresheet as Mourinho’s men made an impressive statement.

The inquests soon began, with former Red Devils full-back Patrice Evra describing them as a shambles and club great Gary Neville said their performance was “an absolute shambles” as United matched the 6-1 loss to Manchester City in 2011.

Rashford apologised for the performance.

He said on Twitter: “First and foremost I’m a United fan. This is my club. I’m so proud to wear this shirt but there are no excuses, it’s just not good enough and to every single fan around the world that tuned in today, I’m just so sorry.

“You deserve so much better than that. I would have stayed away from social media tonight but you deserve to hear from me during the highs and the lows, there is no hiding.

“I feel horrible but I promise you we will do better.”

Club captain Harry Maguire also echoed those sentiments, saying on Instagram: “Today was totally unacceptable, we apologise to the fans, you deserve so much more. There’s no excuses.

“One thing for sure is that we will do everything we can to put this right. We’re all hurting but this is the start of a long season with everything to play for. We must stick together.”

“It’s very embarrassing, it hurt all the players,” said Solskjaer. “It hurts me as the manager. It’s my worst day ever.

“I’ll hold my hands up, I’m responsible for this. I’ve lost 5-0 with United and we’ve lost 6-1. We’ve lost big results before and always bounced back.

“I promise we’ll do everything we can to turn this around.

“We know how good they can be but today all our mistakes came almost like Christmas everything at once and if you make too many mistakes against a good team and you’ll be punished.”

Victory will be sweet for Spurs, who have scored 11 goals in their last two away games and still have Gareth Bale to come into their side after the international break.

This win comes on the back of four games in eight days, but they showed that under Mourinho this season they could challenge at the top end of the league.

Mourinho, on his second visit back to Old Trafford, was honoured by the win.

“The pleasure is not the 6-1, the pleasure is the performance and three points which we really need after losing points at home against Newcastle.

“The target, objective is every match we go to win. I told the players in the last couple of days 1000 times a good result at Old Trafford is to win.

“Of course if you draw it’s not a bad result but that’s the kind of mentality we must get. It was a great performance, a great result. We have seven points, so our position in the table is so-so.”