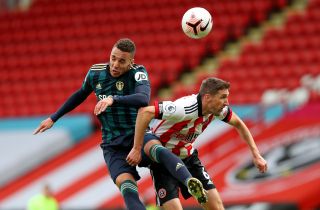 Marcelo Bielsa believes Rodrigo will begin to show his quality after a taking a “good step forward” with his performance against Sheffield United.

The club-record signing from Valencia was dropped down to the bench for Sunday’s Yorkshire derby at Bramall Lane. It was a move that caused some surprise but the 29-year-old is still building up his match sharpness, while Patrick Bamford has excelled so far this season.

Rodrigo was introduced at half time and his arrival coincided with Leeds showing much more urgency in attack, with the Spain international linking up play and providing a good foil for Bamford.

Bamford stole the headlines with his 88th-minute header sealing a 1-0 win, becoming the first player in Leeds’ history to score in his first three top-flight appearances for the club, but Bielsa recognised the contribution of Rodrigo and now expects him to improve.

“He showed more of the player he is,” said the Leeds boss. “He allowed attacks to finish in the opposition half and he played 45 minutes in which we played better, that makes it easier to play well.

“He also helped making us play better. It was a good step forward for him. He is a player who has the capacity to unbalance which he has not shown yet.

“Today he helped to facilitate our attacks and as time goes on he will help to score goals and to be on the end of attacks.”

Leeds have made a solid start to life back in the Premier League, winning two of their opening three matches, with their only defeat coming in that hugely entertaining game against champions Liverpool which finished 4-3 at Anfield.

However, Bielsa was not getting carried away, saying: “I think that to refer to the adaptation in the Premier League, more games have to go past as we have only played three games.”

By contrast, Sheffield United find themselves bottom of the table at this early stage of the season after losing all three of their matches so far without scoring a goal.

Blades boss Chris Wilder spoke of the importance of being effective in both boxes and this week hopes the club will step up their search for a striker.

Liverpool’s Rhian Brewster is understood to be Wilder’s top target, although he also now wants to sign a defender following the news that Jack O’Connell requires a knee operation and looks likely to miss the rest of the season.

Asked about Brewster, Wilder replied: “I have been focusing on the team but time is running out and we all understand that.

“The first goal is huge in the Premier League. Obviously, not scoring is disappointing, we need to score. We need to score and we are not and it makes getting a result on a knife-edge.

“In all three games the opposition have not really created much but what happens in both boxes is key. Games are won and lost in the box.”

On his side’s start to the campaign, Wilder said: “We’ve all gone through difficult periods. We are not getting in the cars and going home, they care about their results and performances.”