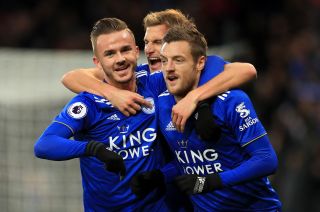 He fired the Foxes to fifth as they agonisingly missed out on the Champions League on the final day of the season.

Vardy signed a new deal at the King Power this summer to take him past his 36th birthday and, ahead of Sunday’s opener at West Brom, Albrighton expects the striker to keep going.

He told the PA news agency: “There’s an elite group and with the goals he’s scored Jamie deserves to be in that group of strikers.

“To do it (score 103 Premier League goals) in the amount of games is incredible and to have won the league and played and scored for England is amazing. To look at his rise, it’s a well-known story, but it’s incredible.

“We were in a hotel in Leicester and the manager went up to his room and there was a Jamie Vardy autobiography in there. That shows how far he come as a player.

“He keeps going and keeps getting better with age. He is still willing to run the channels and chase lost causes but also, since Brendan (Rodgers) has come in, he has given him a different dimension.

“He has worked on him coming to feet and his link up play. He can only improve as a player.”

Rodgers’ side missed out on the top four by four points after losing 2-0 to Manchester United on the final day in July.

They won just two of their final nine games after returning from lockdown to put a disappointing slant on an otherwise successful season.

The Foxes, though, do have a Europa League campaign to focus on when the group stages start in October – just one of Albrighton’s targets.

“It was a sense of disappointment at the end of last season and it’s something we’ve spoken about this summer,” said the 30-year-old.

“We never really got a chance to speak after the game, it was a brief debrief and people weren’t in the right frame of mind to be listening to everything.

“We’ve had a chat now and touched on it and put it to bed. We’ve said we need to write it off and go in with a fresh attitude.

“We’ve got an exciting season ahead of us, we’ve done well in the cups so we want to go one step further. We want to get into finals and win.

“Our league form needs to stay the same. Our aim is to finish in a European position and we’ve got the added bonus of the Europa League.

“Looking at how well Wolves did in it last season, in normal circumstances they might have gone further.

“We’re looking at that and thinking ‘why can’t we go all the way in the competition?’ We’ve got some quality players.”