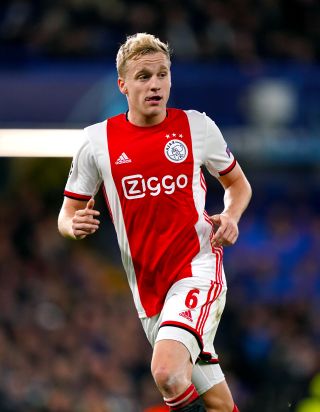 Manchester United are closing in on the signing of Ajax midfielder Donny Van De Beek, the PA news agency understands.

The 23-year-old helped the Amsterdam side reach last year’s Champions League semi-finals and has been linked with a variety of high-profile moves.

Ajax manager Erik Ten Hag said there had been developments regarding Van De Beek’s future after the player was conspicuous by his absence from the squad for Saturday’s friendly against Eintracht Frankfurt.

It is understood United have since made progress and are close to agreeing terms with both club and player.

Van De Beek would be Ole Gunnar Solskjaer’s first signing of the summer.

The box-to-box midfielder, who was heavily rumoured to be on his way to Real Madrid before the coronavirus outbreak, scored four goals in Ajax’s run to the 2018-19 Champions League semi-finals and 40 in all competitions over the last three seasons.

Ajax chief executive Edwin Van Der Sar has reportedly confirmed Van De Beek will be allowed to leave Amsterdam this summer, but the former United goalkeeper insisted in June that it would not be in a cut-price deal.

Speaking to Dutch broadcaster NOS, he said: “We are not going to have a sale for the best players we have. We prefer to keep them ourselves.

“A crisis is always taken advantage of and some clubs will get into trouble and maybe have to let a player go earlier or for a lower amount. But I think we are in the fortunate circumstance that we have a strong financial policy, not necessarily needing to sell. “