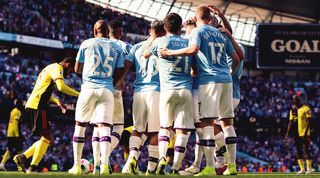 Manchester City have secured 2nd in the Premier League, and will be starting to look forward to next month's Champions League culmination.

At best, Pep Guardiola's side can finish 15 points behind Liverpool, and 17 points short of their own tally from last season.

It would be unusual, however, for this side to drop intensity at the end of the season – especially after opponents Norwich embarrassed them early on in the campaign.

The Canaries' fate is already sealed: not just relegated, but bottom of the Premier League. A win would, at best, leave them 10 points off safety – which, given there will be no more games to play, is quite a way short.

Kick-off is at 4pm BST and the game is being shown on Sky One and Pick in the UK. See below for watching details where you are.

SEE THE FULL SCHEDULE Premier League live streams: How to watch every game

If you’re on holiday or just simply out of the country, your domestic on-demand services won’t work – the broadcaster knows exactly where you are from your IP address. Your access to the game will be automatically blocked, which is annoying if you’ve paid a subscription fee and don't want to use an illegal, buffering stream that makes you miss another Pierre-Emerick Aubameyang goal. And that's where we recommend ExpressVPN (more on which below).