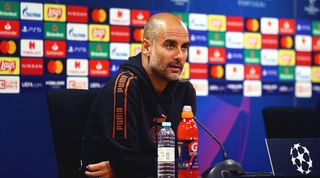 According to reports, Manchester City bosses are considering who will take over from Pep Guardiola when his contract ends.

Guardiola is contracted to City for one more season, having taken over the Eastlands club in 2016. With this being his fifth at the helm, the Catalan will have been at Man City longer than he managed Barcelona or Bayern Munich by the time next season ends.

While Guardiola has delivered fantastic success to the club in the shape of two titles though, it's apparent that not all is rosy at the Etihad, with reports coming out from several sources that players are frustrated with his tactics in Europe. Guardiola matched Lyon's back three in the defeat last week and was blamed for the defeat for leaving the likes of Riyad Mahrez and Phil Foden out of the action.

City have given their manager full backing both in public and private and aren't prepared to terminate his contract. He has been coveted by the club as early as 2012 - but though the club's board have always been of the opinion that he was the man to take them forward and lead them to a first Champions League success, recent failures have apparently made them more open to hiring a new boss when Guardiola's contract expires.

CITY ANALYSIS Is Pep Guardiola holding Manchester City back in the Champions League? How his biggest weakness is linked to his greatest strength

Mauricio Pochettino is heavily rumoured by the press to be the man that City would choose for their next manager. Like Pep, Pochettino is a student of Marcelo Bielsa, having played for the Leeds United manager at Espanyol. The former Tottenham Hotspur boss is still out of a job since leaving North London last year and boasts a healthy CV in which he took Spurs to the Champions League final.

Julian Nagelsmann has also been touted by some for the job. The German has recently impressed with RB Leipzig, taking them one step further than City in the Champions League, and apparently joined Leipzig over the likes of Real Madrid and Bayern Munich, excited by the project that they were building. He is an innovative young manager with charisma, and City will be watching his situation unfold in the Bundesliga with keen eyes.

JOSHUA KIMMICH SPEAKS TO FFT 'Liverpool were just stronger than us in the Champions League last year. It has hurt since 2013'

Other names touted for the role include Marcelo Gallardo and Mikel Arteta, both of which have shown themselves to be progressive coaches capable of big things. The availability and suitability of either though raise questions.

In the meantime, Manchester City are still reeling from their Champions League exit and plan to continue spending to improve the side before next summer. There is an argument that City's squad are starting to tire under Guardiola's methods, making the need for fresh blood even more vital.

Having brought in Ferran Torres and Nathan Ake already this window, City are keen on signing another centre-back and are entertaining the possibility of bringing Torres's ex-teammate Jose Gaya from crisis club Valencia, as depth at left-back. Lionel Messi's issues at Barcelona are being tracked too, with City prepared to pay "whatever it takes" to bring him to the Premier League, while Sergio Aguero entering the last year of his contract prompts a conversation about new strikers that could end up at the club.

One position in which City are not expected to strengthen, however, is central midfield. Having just let David Silva leave for free, Pep is said to be happy with his options.