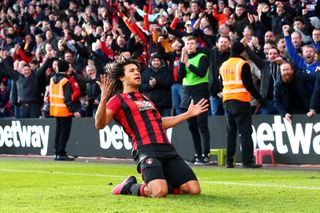 The deal is worth a guaranteed £40million to the relegated Cherries, potentially rising by a further £1million.

Holland international Ake has been a standout performer at the Vitality Stadium since joining from Chelsea for a reported £20million in 2017. He had previously been on loan with Eddie Howe’s side.

Devastated.. Love this club no matter what! Thank you for all the support this year and sorry we couldn’t make it in the end.❤️🙏🏾🍒 pic.twitter.com/UAzadx4JPa— Nathan Aké (@NathanAke) July 26, 2020

There was expected to be strong interest in the 25-year-old this summer, with his departure becoming almost inevitable when Bournemouth’s relegation was confirmed last weekend.

It is understood City are the only club to have so far made an offer. Ake missed the Cherries’ final three Premier League fixtures after suffering a groin injury in 4-1 win over Leicester on July 12.

City are in the market for a centre-back after surrendering the title to Liverpool. Star defender Aymeric Laporte missed a large chunk of the season due to injury, while England international John Stones has seemingly fallen out of favour with manager Pep Guardiola.

Ake, capped 13 times by his country, has made 121 appearances for Bournemouth, scoring 11 times.

Asked if the player may have made his final appearance for the south-coast club after he sustained an injury against the Foxes, Howe replied: “I think it would be silly of me to comment on that, to be honest, at this moment in time.

“I think next season and everything beyond it will take care of itself.”

City are also involved in advanced negotiations with Valencia for the signing of 20-year-old winger Ferran Torres.

It is understood the Premier League side have agreed a basic fee £20.9million with Valencia and talks over potential add-ons are continuing.

City are also in the market for a new winger following the departure of Leroy Sane to Bayern Munich.

Spain Under-21 international Torres is an attractive proposition as the player is entering the final year of his contract and the fee can be kept relatively low.