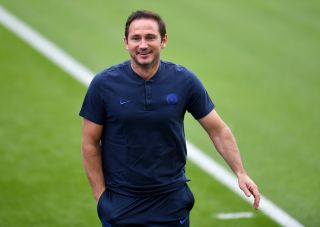 Chelsea’s rebuilding plan has taken another step forward after highly-coveted defender Malang Sarr signed a five-year deal at the club.

Sarr will head straight out on loan, but Chelsea director Marina Granovskaia hailed the France Under-21 international as a “tremendous prospect”.

England left-back Ben Chilwell completed his £45million switch from Leicester on Wednesday, while striker Timo Werner and playmaker Hakim Ziyech have already been settling in at Stamford Bridge for several weeks.

Sarr’s acquisition adds another long-term shot in the arm to the Lampard era, with Granovskaia admitting Chelsea jumped at the chance to bring him on board.

“The opportunity to sign Malang was one we could not miss,” said Granovskaia.

“He is a tremendous prospect and we will be monitoring him closely during his loan period, hoping he will soon be back at Chelsea. We are very happy to welcome him to the club today.”

A left-footed centre-back who can operate at left-back and in a back-three, Sarr racked up more than 100 appearances for Nice following his debut aged just 17.

Eligible to represent Senegal through his parents, Sarr has turned out for France from Under-16s to Under-21s, captaining the Under-18s.

Meanwhile, a number of Chelsea players are in quarantine after returning from their summer break.

A group of the Blues’ first-team squad are following government guidelines on self-isolation, the PA news agency understands.

People visiting countries not on the government’s travel corridor list have to stay in isolation for 14 days on their return to the UK.

Chelsea are back in training and building towards the new Premier League season, with the Blues facing Brighton at the Amex Stadium on Monday, September 14 in their first outing.

The quarantine period will prove a disruption to manager Lampard’s pre-season plans, with Chelsea still assimilating their new arrivals.