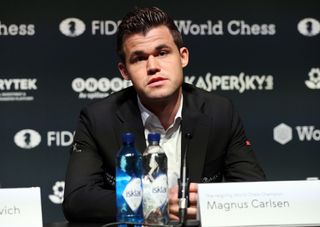 Chess world champion Magnus Carlsen was forced to concede defeat in the Fantasy Premier League title race after a scintillating campaign almost took the Norwegian to number one.

Carlsen caught the attention of the fantasy football world when he temporarily rose to top spot in December in the Premier League’s official game, thanks to a 32-point haul from his captain, Liverpool’s Mohamed Salah.

The man who has been chess world champion since 2013 managed to keep himself in the title hunt going into the Premier League’s final day, but was beaten by Aleksandar Antonov, who managed a whopping 93 points in the final gameweek.

“Bossed it on the final day. Congrats, TooGood indeed!” Carlsen tweeted to Antonov, whose team name was @TooGoodFPL.

Carlsen finished the season ranked 11th out of more than 7.5 million after scoring just 40 points in gameweek 38+, with his captain, Salah, scoring just two points.

Salah was one of two players the chess ace brought into his team to try to clinch the title – he also added Everton defender Jarrad Branthwaite, who managed just one point in a 3-1 defeat to Bournemouth.

Antonov meanwhile benefited from Kevin De Bruyne’s display against Norwich, the Belgian scoring twice and assisting once for 19 FPL points, which Antonov doubled by captaining the pass master.

Carlsen, meanwhile, has a history of strong showings in the FPL, having finished 2397th in 2017/18, raising the possibility he could mount another title challenge in the coming seasons.