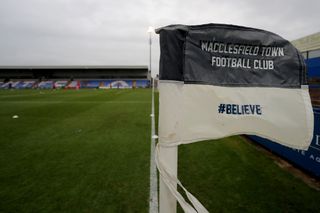 Macclesfield have been expelled from the National League 13 days after being wound up by the High Court.

The National League announced its board has passed a resolution to expel the Silkmen with effect from October 12.

The club has been suspended from the league, with all scheduled fixtures before the expulsion date postponed.

On September 16 the Insolvency and Companies Court wound up the club over unpaid debts of more than £500,000.

Players and staff had been made redundant in the wake of the ruling.

Macclesfield were due to open the season at home to Bromley on Saturday before trips to Boreham Wood and Aldershot.

They were relegated from League Two when the EFL successfully appealed against a points deduction they said was too lenient in August.

The club had initially been docked two points and fined in relation to the non-payment of wages, but an independent arbitration panel added a further penalty, effectively relegating Macclesfield and handing a reprieve to Stevenage.

It was the third time the club had been punished for issues relating to salary payments and their failure to fulfil League Two fixtures against Plymouth and Crewe when players had gone on strike over non-payment of wages.