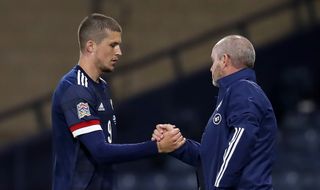 Lyndon Dykes is confident of a more positive outcome for Scotland when Israel return to Hampden Park next month.

The 24-year-old QPR striker made his international debut in the 1-1 draw on Friday night where Ryan Christie’s penalty before the break was cancelled out by Eran Zahavi’s deserved equaliser in the 73rd minute.

It was not the start to the Nations League campaign that Dykes wanted, but he believes there will be more joy when the two sides meet on October 8 in the play-off semi-final, which offers a pathway to the delayed 2020 Euro finals.

Speaking before news emerged that Czech Republic declared they will not host Scotland in their second group fixture on Monday due to a coronavirus threat, Australian-born Dykes said he was “excited” to pull on the dark blue shirt for the first time.

"It's about listening and taking the messages on board – we know we can play better than tonight."— Scotland National Team (@ScotlandNT) September 4, 2020

On the game, he said: “Obviously the coaching staff will look back at the video but as players as well, we should all take a look ourselves.

“For me, I want to win, I think we should be winning that game.

“I think we should be pushing them, pressing them, we should be showing them that when they come here they have come for a battle.

“We’re going to work hard, we’ve got quality players and next time it comes around I think will be a different story.”

Dykes, who only joined QPR from Livingston last month, is looking for more confidence from his new team mates.

He said: “I’ve only been here for a few days, and look at the squad, we have world class players.

“I think maybe some, sometimes we need a bit of belief. We have to go out there and think that we’re better than this team, we should be beating Israel.

“At the end of the day, it didn’t happen for us day and there’s always the next game.

“We didn’t lose the game. We got a point so it’s not the end of the world.”