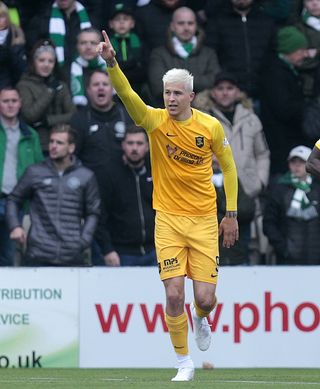 Steve Clarke insists he has not handed Lyndon Dykes a Scotland call-up just to kill off Australia’s interest in the striker.

The QPR frontman is eligible to represent the Socceroos having been born on the Gold Coast.

But the 24-year-old – whose parents hail from Dumfries – has left Aussies manager Graham Arnold disappointed after accepting a call-up to Clarke’s team ahead of next month’s Nations League double header against Israel and the Czech Republic.

Last week Arnold urged Clarke to think seriously before capping former Livingston ace Dykes, saying: “If Scotland are pressuring him and then play him once and he never plays again, well I couldn’t live with myself doing that to the kid.”

But the Hampden boss insists he has big plans for the striker, who is still on a high after completing a £2million switch to Loftus Road last week.

“I don’t think it’s a case of trying to rush someone in to cap them so they can’t do anything else,” he said. “It’s about doing the right thing.

“I spoke to Lyndon a long time ago before the potential fixtures in March of this year. We discussed a lot of things.

“Lyndon was very honest. He obviously had the chance to play for Australia as well.

“We had a good honest chat. He gave me his thoughts, I gave him mine on what would be best for him – and thankfully he’s named in the squad.

“I would imagine he would be getting the same conversation from Graham Arnold as he was from me.

“I didn’t put any pressure on him, I wasn’t pushing. It was very important for Lyndon to make the decision that he wanted to make.

“Obviously we can give him little ideas about what it will be like if he comes into the Scotland camp but I’m just glad he’s come down on our side.”

Dykes has been included alongside a familiar face, with Livi goalkeeper Robby McCrorie – who is on loan from Rangers – also receiving a maiden call-up.

Arsenal’s Kieran Tierney is also included for the first time under Clarke after finally overcoming hip and shoulder injuries.

But Ryan Fraser leads the list of noticeable absentee. The former Bournemouth winger has not played since before lockdown having rejected the chance to extend his Cherries contract in order to complete their Premier League campaign.

The Hearts duo Steven Naismith and Craig Gordon miss out with the Jambos still over a month away from kicking off their Scottish Championship season.

And Inter Miami’s Lewis Morgan and Sporting Kansas City forward Johnny Russell are also omitted due to quarantine rules the pair would have to follow on their return from the US.

Former Chelsea defender Clarke said: “Kieran didn’t have the best of starts at Arsenal injury wise – but he’s made a lot of people sit up and take notice lately.

“I called him a few weeks ago to congratulate him on winning the FA Cup, even though it was against my old club which I wasn’t very happy about.

“He’s in a good place and it will be great to have him in the squad. You want as many good players in your squad as you can and Kieran will make the squad better.

“I haven’t actually spoken to Ryan Fraser yet. I was waiting on him getting himself a club but he hasn’t managed that yet.

“He actually contacted one of the medical staff and said his fitness wouldn’t be acceptable for a match of this level.

“It’s a difficult one for Steven and Craig Gordon. I could have picked them. They’re both very experienced international players who if they had to come into the next squad will be ready.

“(The coronavirus) did affect us a little bit in terms of Morgan and Russell in America. We could have brought them over but with the quarantine rules it would have been a little unfair to the players and their clubs. That’s not to say we won’t do it next time if we need them. I will.”