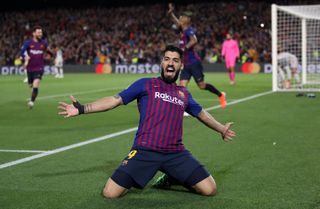 Atletico Madrid have announced the signing of Luis Suarez from Barcelona on a two-year deal.

The 33-year-old striker had one more year to run on the contract he signed at the Nou Camp in 2016, but was told by new head coach Ronald Koeman last month that he was not part of his plans.

The transfer fee is reported to be just £5.5million as he arrives at Atletico following the departure of Alvaro Morata, who rejoined Juventus earlier this week.

“Atletico de Madrid has reached an agreement with Luis Suarez for the striker to become a new Red & White player. The Uruguayan passed his medical and signed a two-year contract with our club on Friday,” said a statement on the club’s official website.

“We welcome to our team one of the world’s most prolific strikers, who gives his all on the pitch and has proved his quality on the most demanding of stages. Welcome, Luis!”

Suarez said goodbye to Barcelona in an emotional press conference on Thursday. He left as the club’s third-highest goalscorer of all time, netting 198 goals in 283 appearances for the Catalans.

Barcelona captain Lionel Messi, who himself appeared close to leaving this summer after handing in a shock transfer request, criticised the decision to sell Suarez, saying he had been “kicked out” of the club, in a touching tribute to his close friend on Instagram.

“It will be strange to see you with another shirt and much more to face you,” said Messi.

“You deserved the goodbye for what you are: one of the most important players in the club’s history, achieving important things both as a group and individually.

“And not to get kicked out like they did. But the truth is that at this point nothing surprises me. I wish you all the best in this new challenge. I love you very much.”

It appeared that Juventus would be Suarez’s next club but negotiations were marred after complications over the Uruguayan’s passport application.

He will now remain in LaLiga and line-up against his former side Barcelona later this season. Koeman’s side visit the Wanda Metropolitano on November 22, with the return fixture at the Nou Camp on May 9.