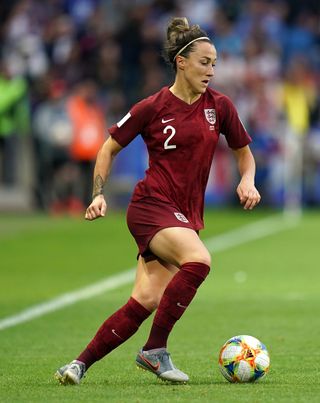 England international Lucy Bronze believes the lack of atmosphere could be advantageous for Lyon in their “exciting” Champions League quarter-final against Bayern Munich.

The competition is set to resume on Friday, having been paused since March, with all ties now one-legged and taking place behind closed doors in northern Spain.

Lyon have been the dominant force in women’s football over the last few years and have lifted the last four Champions League trophies.

OL were declared French champions in May after the season was brought to a premature halt due to the coronavirus pandemic, and have already returned to competitive football, beating Paris St Germain on penalties earlier this month to lift the Coupe de France.

But 28-year-old defender Bronze, who moved to the French club from Manchester City in 2017, accepts Saturday’s clash with Bayern is the big one.

“Now that’s been changed into a one-off game it just makes it even more exciting. You’ve got to give everything to this game otherwise your tournament’s finished, you’re going home, so it makes it more exciting.

“We know that Bayern are a top team, they’ve got a lot of top players in the team, a lot of exciting players and they play good football.

“I’ve seen some of their games this season, before I even knew I was playing them, I like to watch them and they play some good football at times so it’ll be a good game.”

Lyon have yet to play a competitive match behind closed doors, with 5,000 fans having attended the Coupe de France final on August 9.

But Bronze thinks playing in empty stadiums could work in her side’s favour.

“I think Lyon’s not a particularly noisy team anyway, I think the type of players that we have, a lot of them are quite calm and composed in the game and I think that’s the way that we play as well, like a calm, composed, in-control team.

“So if anything it might play to our advantage, trying to keep people relaxed and ready when they’re on the ball.”

Lyon are the most decorated team in the history of the competition with sixth titles and are favourites to record a seventh, and Bronze reckons a winning mentality surrounds the club.

“From the minute I got here you could just tell that these players demand success,” she said. “That’s what they want, that’s what they’re driven for and the past three years playing in a team like that has been great.

“I’ve learned so much and worked myself, fitting myself nicely in the team and you kind of get used to it – not get used to it because it doesn’t get boring ever – but that mentality change is so different to every other team that I’ve ever been in and I think to any other team that’s in football at the minute.”

:: Bronze was speaking to the PA news agency as a member of Team VISA as part of VISA’s efforts to futureproof women’s football and grow the game.