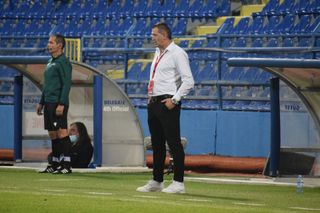 Lokomotiv Plovdiv manager Bruno Akrapovic hopes to prove his son wrong when Tottenham visit in the Europa League second qualifying round on Thursday.

Spurs travel to Bulgaria hoping to win the first of three qualifying rounds before they make it to the group stage.

Jose Mourinho’s men are heavy favourites to progress, not least in Akrapovic’s own house.

“Tottenham is a big name, my little son, who is 10 years old, he told me we didn’t have any chance,” Akrapovic said. “I asked him why, he said ‘Because of Harry Kane’.

“I asked him what was so special and he said only the name tells you everything. Harry Kane, like hurricane.

“It is nice. I hope we have a good game, a special situation for the whole of Bulgaria, it is a big game for everyone. First of all I hope everything goes positive.”

Mourinho has labelled this as a tough tie, especially as it is played over one leg, and Akrapovic is hoping his side can surprise the Premier League outfit.

“For us this game is very important, not only for us all of Bulgaria, especially Plovdiv,” he said. “It is a special game. We try to do our best in every game.

“It is not so easy tomorrow with how big a club Tottenham are. For us it is important that we play to our style and maybe we can surprise the opponent in some situations.

“We want to play in our style that we play all the time in the Bulgarian league, it is not so easy but our team is prepared for the game. We want to do the best to get the result for us.”

The 52-year-old, who used to manage the Bosnia national team, is particularly excited about coming up against a man of Mourinho’s standing in the game.

“I watched his training session when he was at Real Madrid and it is a pleasure for me to be on the line in the same match as such an elite coach.”