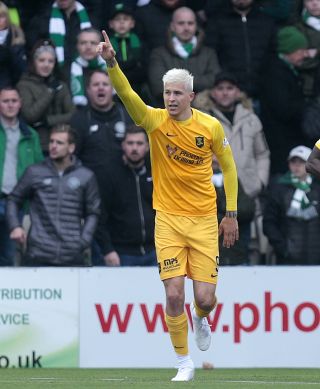 The striker has been the subject of two failed bids in the past week, both reported to be from Barnsley, and has consistently been linked with Rangers along with several other clubs.

But Holt is confident the former Queen of the South frontman will just focus on football when Livi kick off their Scottish Premiership season against St Mirren in Paisley on Saturday.

“It doesn’t bother him,” Holt said. “We talk to him every day, we have a good bit of banter with him. He knows where we’re at.

“He just concentrates on playing football and that’s one of the good things – and I’ve touched on it since the day he came in – it’s ‘Aleeves rolled up, get me on the training pitch and let me play and I’ll give you my best’.

“More often than not his best is good enough to get us something in the game. It’s very rare that I can say he’s not been at it. He will be at it if selected on Saturday.”

Holt is as excited about the new campaign as ever but admits there is a touch of the unknown about the kick-off amid coronavirus protocols.

“I’ve got that wee kind of feeling in the belly, the fire, the nervousness, the excitement, because there’s a football season starting,” he said.

“Yes, it’s different, we have talked at length about the different protocols, no fans, but it’s still the season starting, it’s still what we are paid to do. I’m really looking forward to it.

“But I think it’s a wee bit of the unknown because we have had a shorter pre-season, we have had games against each other, which is unusual, we haven’t had the League Cup to get up to speed.

“There’s a few knocks and bumps but I think that’s across the board with clubs, you are finding every day there’s something a wee bit different with somebody else because of the intensity levels in a short period of time.

“So across the board we are all into the unknown but we are all excited.”