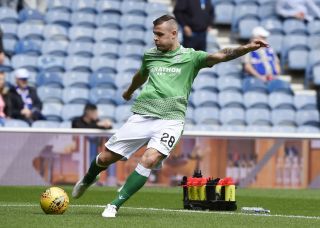 Frontman Lars Lokotsch, 24, has arrived from the German fourth tier while 22-year-old defender Julien Serrano has joined on a season-long loan from Monaco having made seven appearances for Cercle Brugge in the Belgian top flight last season.

Holt is not finished with his recruitment drive though and will step up attempts to take former Celtic and Hibernian striker Stokes back to the Scottish Premiership.

“He’s another one that’s on the radar,” Holt said. “I like what he brings, I like his qualities.

“Being honest, he’s probably someone we might not have got in the past. But there’s an opportunity and we will have a look at it.

“Hopefully we will have a chat with him and we’ll take it from there. But it’s not done and dusted.

“We have been liaising back and forward with his representatives and dealing with that side of things first and foremost.”

The 32-year-old has had a troubled time on and off the park of late with spells in Greece, Turkey and Iran coming after his third spell at Hibs ended in January 2018. But the Irishman comes with more than 130 goals in Scottish football to his name.

“The boy’s got qualities that will enhance us and that’s what we want,” Holt said. “I think everybody knows how we work, how everyone buys into it and puts an honest shift in.

“I know what he can bring and I think he can enhance us if it comes to fruition but there is nothing signed and sealed.”

Holt also got a good look at his two new signings. The pair will go straight into the squad for Sunday’s visit to Aberdeen but the Livi boss cautioned they would both “need time to settle”.

He added: “Julien is a left-back but can play in midfield. He is very technical, gets up and down. You look at him and think he’s more of a ball-playing defender but he’s actually very aggressive, likes the physical side of it.

“Big Lars is a good number nine, German boy, big, strong, wants it. Similar traits to Lyndon in that he’s hungry, wants to learn, wants to improve, knows his failings, what he needs to get better.

“But he impressed us all when he came in and trained earlier in pre-season, didn’t look out of place, didn’t faze him. Defenders will know they’ve been in a game with him. We knew that if something did happen (with Dykes) we could maybe get Lars in.”