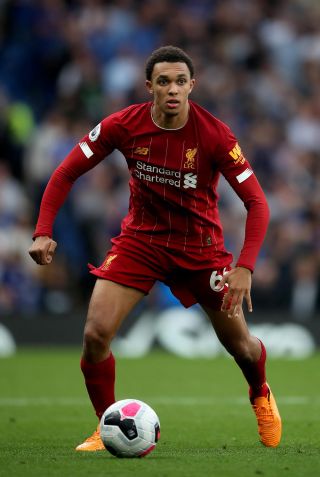 Liverpool made Premier League history as they extended their winning run to 15 games with a 2-1 success at Chelsea.

Goals from Trent Alexander-Arnold and Roberto Firmino saw the Reds become the first side in the Premier League era to win their opening six games in consecutive seasons.

It is also a club-record 23 matches since they last lost in the league and, after restoring a five-point lead over Manchester City at the summit, they are going to take some stopping in their pursuit of the title, even if they were hanging on at the end.

Chelsea, whose boss Frank Lampard is still waiting for a home win after four games, got back in it through N’Golo Kante and put Liverpool’s winning run under the sort of threat they have rarely encountered, but they fell short in their search for an equaliser.

Things might have been different for them had Cesar Azpilicueta’s equaliser at 1-0 not been ruled out by VAR for a marginal offside call, but their defence remains a real issue as they cannot keep a clean sheet and have shipped 13 goals in their opening six league games.

They pushed hard for a leveller after Kante’s fine individual strike, but Liverpool are brilliant at holding on to a lead and got the job done for a landmark win.

Jurgen Klopp’s side simply never lose after scoring the first goal – an impressive record that now stands at 61 games – so going in front as early as the 14th minute was a nice tonic and it was a brilliant strike that gave Liverpool the lead.

After Andreas Christensen clattered into Sadio Mane on the edge of the area, Mo Salah teed up Alexander-Arnold to drill the ball into the top corner.

The England full-back had spoken in the week about his desire to add goals to his game and he delivered in style for his first Premier League goal since November last year.

Chelsea’s response was good and they should have been level 10 minutes later as Tammy Abraham broke the offside trap and raced in on goal, but Liverpool goalkeeper Adrian stayed big and blocked his shot well.

The striker, who had scored seven goals in his last three Premier League appearances, would have expected to score, but it looked like his miss was not going to prove costly as Chelsea thought they had an equaliser in the 27th minute.

They got in down the left and after a scramble in the area, Azpilicueta squirted home from close range, but VAR ruled that Mason Mount was in an offside position in the build-up and it was disallowed.

As was the case at Leicester on Saturday, where the Foxes scored almost immediately after seeing Tottenham have a goal chalked off, Liverpool made the hosts’ pain even worse by doubling the lead three minutes later.

Firmino could have doubled his tally and put the game to bed early in the second half when he was again given the freedom of the penalty area, but Arrizabalaga did brilliantly to palm the ball away.

To their credit, Lampard’s side did not wilt and searched for a way back into it and, after earlier fizzing an effort wide, Kante was the man to provide the moment of quality.

He picked up the ball on the left, cut inside and fired an unstoppable effort into the top corner in the 71st minute.

Chelsea put their visitors under severe pressure and they could have stolen a point in the final five minutes, but Michy Batshuayi and Mount both missed fine chances.