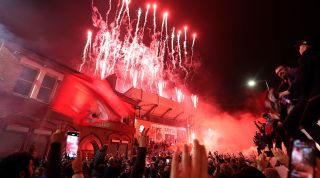 Liverpool fans who still haven't had enough of their 2019-20 title triumph can keep the good times rolling this weekend with the airing of BBC Two documentary Liverpool FC: The 30-Year Wait.

The 30-Year Wait will be narrated by Liverpool fan Jason Isaacs, and tells the story of Liverpool's three-decade-long hunt for England's top-flight trophy – from the Anfield outfit's '90s angst through to European glory and Klopp's transformative arrival.

You can see the trailer below, and also find out how to watch if you're outside the UK with our handy VPN guide.

If you’re on holiday or just simply out of the country, your domestic on-demand services won’t work – the broadcaster knows exactly where you are from your IP address. Your access to the game will be automatically blocked, which is annoying if you’ve paid a subscription fee and don't want to use an illegal, buffering stream that makes you miss the action. And that's where we recommend ExpressVPN (more on which below).