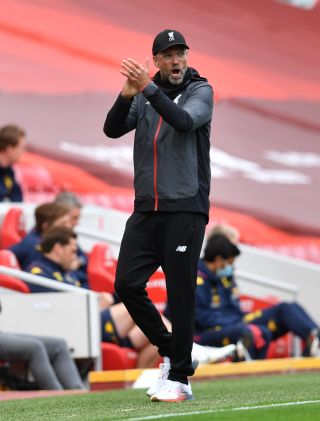 Liverpool boss Jurgen Klopp believes the upcoming season could be the most intense he has ever experienced.

The Premier League champions launch their new campaign in the Community Shield on Saturday, just five weeks after wrapping up their first league title in 30 years.

The Reds have been back in training for just a fortnight and there will be less space between games in the condensed league season ahead, which is due to start on September 12.

Klopp said at a press conference: “Would I want to play a proper game after two weeks’ preparation? No, but we knew (about) it for a while.

“It took a while until we got any schedule but since we’ve known it we’ve accepted it 100 per cent.

“We have had two weeks’ training and worked really hard.

“For us, like Arsenal, we prepare for a whole season – one of the most intense, probably, we have ever experienced in our lives because of the amount of games and the time we have for that.

“It’s as perfect as we can be and we will try everything to win the game and Arsenal will do the same.”

Klopp added that he is stating facts and not complaining as the world continues to fight the Covid-19 pandemic.

He said: “It will be intense but nobody is moaning. We are happy we can play at all.

“Time is still uncertain for all of us, not only in football. The situation is not sorted so we should not feel like it is. We have to show responsibility for a lot of people in the world.”

The Wembley date with Arsenal comes a fortnight before the Premier League begins, with players involved in international fixtures between.

That further hampers Klopp’s preparations but the German insists that does not mean he considers the Community Shield as a friendly.

He said: “I would be very surprised if this would be the best game we play this season but we should be ready to fight for a result.

“The opponent has a similar situation, so just give it a proper try, everything you have and try to win it.

“That’s all I can say about it. It’s not a test game, it’s not a friendly, it is a proper game against Arsenal.”

Liverpool have made just one summer signing in Greece left-back Kostas Tsimikas from Olympiakos but, with a number of promising youngsters available, Klopp insists there is no urgency to bring in additional fresh faces.

He said: “I don’t know what will happen to be honest. There is a long time to go until October 6 (transfer deadline day).

“We will see what other teams are doing, we will deal with our situation like we always did. We will see how much we can or want to spend.