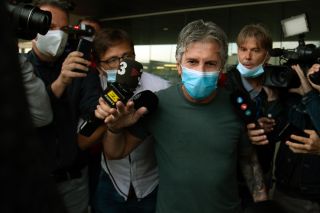 The Lionel Messi transfer saga continues to rumble on, with talks between the player’s father, Jorge, and Barcelona executives failing to reach any conclusion on Wednesday evening.

The player is said to be open to remaining at Camp Nou after all this summer, as his father met with club president Josep Bartomeu to discuss the terms of a new two-year contract.

It is thought Messi’s change of heart is due to a sense of resignation over his chances of forcing through a move before the end of the transfer window. Manchester City have still not given up hope of bringing the 33-year-old to the Premier League, though it appears increasingly unlikely with each passing day.

The Catalan club have made it clear they will not countenance losing their star man, and are willing to take the row through the courts if necessary. Messi’s initial hope was to leave on a free transfer, as per a clause in his contract which allows him to do so each summer, though Barca claim that expired at the beginning of June. The club recently stated he would not be able to leave for a cent less than his €700m buyout clause.

After initially claiming “it would be difficult” for his son to ever represent the club again, Jorge Messi flew into Barcelona earlier this week with a considerably softer stance as club officials fight to keep a player they signed as a 13-year-old in 2000.

As one of the more complicated transfer sagas takes another turn, contradictory reports suggest Messi could be signed for as little as €100m this summer. The Telegraph believes a compromise deal could be arranged that would allow Messi to join-up with former coach Pep Guardiola at City. In light of Jorge Messi’s meeting with Barca officials, however, this seems to be little more than paper talk.

Messi is Barcelona’s record goalscorer, with 634 strikes in 731 appearances. The player has won 10 league titles, four Champions Leagues, six Spanish cups and a record six Ballon d’Ors in his 15 years as a professional. He is widely considered the greatest player in the history of the sport.