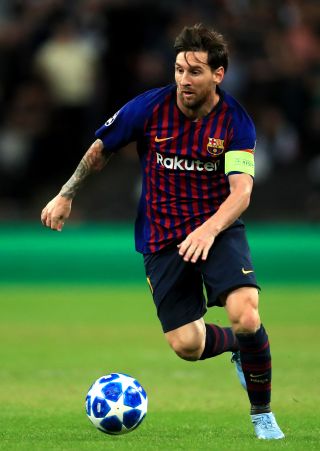 Barcelona have released an image of Lionel Messi modelling their new third kit ahead of a possible return to training with the club on Monday.

Following last week’s news that the Argentinian had reversed his decision to leave Barca this summer, Messi was reportedly set to take part in his first session under new boss Ronald Koeman, scheduled to begin at 1730 local time. According to reports in Spain, Messi underwent a coronavirus test over the weekend.

On Monday morning Barca tweeted an image of the record-breaking forward, 33, posing in the pink shirt of their third kit for 2020-21.

Messi last month informed Barcelona he wanted to depart this summer and intended to utilise a clause in his contract which he and his representatives claimed allowed him to do so on a free transfer.

Barca insisted the time had passed for the clause to be activated and that the player would need to pay the 700million euro release clause in his contract if another club wanted to sign him this summer.

Messi subsequently revealed in an interview published last Friday that he had reversed his decision, saying he could never go to court against the club to secure a move.

He told goal.com: “I am going to continue in the club because the president (Josep Bartomeu) told me that the only way to leave was to pay the 700million clause, that that is impossible, and then the only other way was to go to court.

💙❤️ Leo #Messi: “I will give it my all. My love for Barça will never change.” pic.twitter.com/xBh29dTqpr— FC Barcelona (@FCBarcelona) September 4, 2020

“I would never go to court against Barca because it is the club that I love, that gave me everything since I arrived, it is the club of my life, I have made my life here.”

The six-time Ballon d’Or winner has been with Barcelona since the age of 13 and is the club’s all-time record goalscorer.

He has also won over 30 major titles with Barca, including 10 LaLiga triumphs and four Champions Leagues.