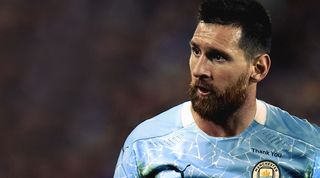 The saga of where Lionel Messi will end up next season is still ongoing, with Manchester City now preparing a mammoth deal for the Argentinian worth £500m - involving their sister club New York City FC.

City have been told that if they wish to match the playmaker's wages, they will have to pay around £90m a year. This hasn't put the club off, however: they are now working out the finer details of a contract for the 33-year-old that would see him stay in the Premier League for at least three years.

Following the expiration of this deal, the City Football Group plan for Messi to head to the MLS to finish his career, joining New York City FC - the club that Frank Lampard, Andrea Pirlo and Messi's former teammate David Villa all wound down their careers at.

With the issues between Messi and Barcelona still unresolved, Man City are stepping out as the frontrunners to sign the man that many consider to be the greatest footballer of all time.

MESSI Why does Lionel Messi want to leave Barcelona? How the perfect football relationship broke down

Paris Saint-Germain's interest is genuine, if not concrete, according to reports. Inter Milan have previously had serious interest in signing Messi, but lack the funds these days to pursue such a blockbuster move.

Manchester United were said to be interested in bringing the little genius to Old Trafford - but would rather pursue Jadon Sancho if given the choice.

TRANSFERS How would Thiago Silva fit in at Chelsea?

Barcelona are still trying to patch things up with their captain and hope they can reverse his decision to leave. The club have been here before with the Argentinian and always managed to talk him round - admittedly, Messi has never come this close to leaving before.

One deciding factor in the Argentinian departing could be the treatment of close friend Luis Suarez. Suarez is rumoured to have been told he isn't part of Ronald Koeman's plans is a short phone conversation, which isn't likely to go down well with Messi.

Barca retain an interest in fellow Argentinian Lautaro Martinez, too - though that alone is unlikely to persuade Messi not to leave, it could be used as a sweetener.

Ultimately, the whispers are getting louder that this whole episode will come down to a straight decision as to whether Messi goes, or president Josep Bartomeu resigns. The Barcelona presidential elections were due for next year but in light of the crisis at Camp Nou, Bartomeu could resign - or be asked politely to - in order to appease Messi.