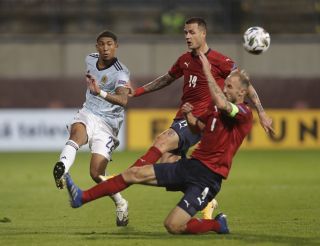 Liam Palmer hopes Scotland have now embarked on a roll that will take them all the way to Euro 2020.

The Scots lacked sparkle in Olomouc but did not enough to get past a team thrown together at just 48 hours’ notice after a coronavirus crisis forced the hosts’ original squad into quarantine.

The critics have not been slow in lamenting the drab displays produced in both the 2-1 triumph at the Andruv Stadion and Friday night’s 1-1 Hampden draw with Israel.

But Palmer insists those two Nations League results, when added to the three straight victories Clarke’s men pieced together before the virus struck, shows the side are heading in the right direction.

And he is now backing his team to streak past Israel when they meet again in next month’s Euro 2020 play-off semi-final and set up a winner-takes-all clash with Norway or Serbia.

The Sheffield Wednesday full-back said in an Scottish Football Association interview: “We’ve got a bit of momentum now. We’ve got four wins from five and we’re top of our Nations League group.

“That’s what we set out to do – keep that ball rolling.

“We’ve got it all in front of us with the qualification games for Euro 2021 as it is now.

“We’re looking forward to that. We ended (Monday) night with some positives and that’s what we’re going to focus on ahead of next month.”

There was not much to enthuse the Tartan Army over the past week but the emergence of Lyndon Dykes certainly offers hope that the Scots’ woes up front may have finally been solved.

The new £2million QPR signing followed up a decent debut on Friday with another impressive showing against the Czechs, capped off with a maiden strike as he steered home from Palmer’s cross to get Clarke’s team off the hook after Jakub Pesek had given the hosts the lead.

Ryan Christie’s second penalty in as many games eventually sealed the win but it was Dykes who got Palmer’s praise.

“It was hard work for Lyndon in the first game,” he said. “He put in a real shift but nothing really fell for him.

“So I’m delighted to see Lyndon get off the mark. It was great to see when the ball came off his foot and flew into the roof of the net.

“It’s an absolute honour to score for my country again – hopefully I can add a few more.”— Scotland National Team (@ScotlandNT) September 7, 2020

“I was delighted with an assist too. I just tried to get forward like the manager said.

“Having been a goal down we needed to react as soon as possible but we managed to claw our way back in.

“Coming into the game we knew they’d be right at it from the first whistle and that’s how it was.

“Some of them had an opportunity there to shine knowing they may never play for their country again.

“We knew we’d have to dig in, especially after going a goal down early doors, and show that reaction to adversity.

So important to get 3 points tonight and top the group! We know improvement is needed but it’s been a good week! Need the whole nation behind us for the big game in October 💙🏴󠁧󠁢󠁳󠁣󠁴󠁿 pic.twitter.com/X80fNm6dPD— Andy Robertson (@andrewrobertso5) September 7, 2020

“I think we’ve shown that in recent wins so that’s definitely a positive to take into the next camp.

“We didn’t have much to work off before the game. Normally we’d go through four or five videos but this time we obviously weren’t privy to that.

“But sometimes you’ve got to react as a group on the pitch. It’s not always down to what the manager tells you. If you spot something during the game it’s up to us as players to deal with it.

“You have to take accountability on the pitch and I think in the last 10 when they were throwing all sorts at us, even the keeper, we did that.

“They made it difficult but we reacted to it. We won a lot of first balls and put our bodies on the line, which paid dividends in the end.”