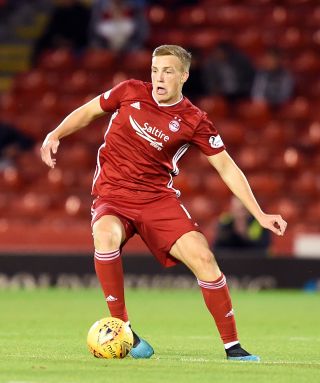 Aberdeen midfielder Lewis Ferguson ended Hibernian’s unbeaten start to the Scottish Premiership season with a penalty winner in a 1-0 victory at Easter Road following coronavirus disruption for the hosts.

Hibs could not train on Saturday after Alex Gogic returned what proved to be a false positive Covid-19 test.

A follow-up test was all clear but the midfielder – a key defensive player in his side’s flying start to the season – was instructed to self-isolate for 10 days by the Scottish Football Association and Scottish Government.

Hibs’ weekend ended in further disappointment after Martin Boyle conceded a penalty amid little danger and Ferguson converted 39 minutes into an entertaining first half to earn the Dons victory.

They went on to record their fourth-consecutive win since opening the season with defeat by Rangers and that ill-fated night out from the eight players, which led to two testing positive for Covid-19 and three postponed matches.

The Dons rarely looked like giving up their lead with Ross McCrorie impressing in central midfield.

Hibs were also without Daryl Horgan after head coach Jack Ross confirmed that the Irish winger was set to leave the club in the coming days. Melker Hallberg and Drey Wright came in.

Ryan Hedges earned a recall for the Dons after scoring a Europa League hat-trick off the bench against NSI Runavik and Tommie Hoban also came in as both sides lined up with three-man defences.

Boyle might have had an inkling it would not be his day when he failed to capitalise on Joe Lewis’s early slip, shooting straight at the goalkeeper, who was well off his line.

Lewis made a good stop from Josh Doig’s powerful first-time strike from long range and from another Boyle strike after Wright had found the wing-back with a brilliant crossfield ball on the break.

Aberdeen were also creating chances as both teams pressed. Ofir Marciano denied Hedges and Marley Watkins following sharp passing moves and Christian Doidge missed a good chance for the hosts after an excellent pass from Hallberg.

The breakthrough came out of the blue as Boyle picked up a loose ball inside his box and looked for a team-mate.

Watkins came in on his blind side and nicked the ball as the winger swung his foot and took out the Dons striker. Ferguson sent Marciano the wrong way from the spot.

Aberdeen looked solid in the opening stages of the second half and Matty Kennedy and McCrorie got long-range efforts on target.

Hibs brought on attacker Jamie Murphy 24 hours after signing him from Rangers but they offered little threat in the second half.

Their best chance came from a brilliant ball inside a defender by Paul McGinn but Wright played a square ball to nobody when he had the option to shoot.

Marciano made decent late stops from substitutes Curtis Main and Dylan McGeouch as Aberdeen moved up to fourth place.