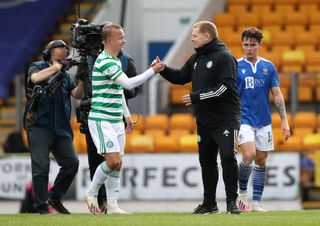 Leigh Griffiths admits he let everyone at Celtic down by letting his fitness go during lockdown but wants to make amends starting with his crucial goal at St Johnstone.

The Hoops striker scored a hat-trick in the 5-0 win against St Mirren last season before the coronavirus crisis brought an early end to the campaign.

Manager Neil Lennon was unhappy with his conditioning when he returned to training and left him behind when the squad flew to France for a pre-season tournament and then he subsequently picked up a calf injury.

Griffiths came off the bench at McDiarmid Park on Sunday to make his first appearance of the season and broke the deadlock in the last minute before fellow substitute Patryk Klimala added a second in the 2-0 win.

The Parkhead striker, who addressed the last few months, said: “The last competitive game I had was the St Mirren game and I wanted to continue that form but it wasn’t to be.

“I let myself down, my club down, everybody down. Hopefully I will do well in the next few games and start repaying them.

“It was a blow but it was my own fault and I had to take it on the chin.

“When the team was away I had worked hard to make sure I was still in the plans when they came back.

“I done that and managed to force my way back into the squad and unfortunately for me I got injured just before the Hamilton game which wasn’t ideal, but I have been working ever so hard to get back.”

Griffiths, however, was always confident that he still had a future at Celtic.

He said: “I spoke to the gaffer at length many times and he always said as long as he is here I will be here.

“I just need to keep working on my fitness and make sure that when I am called upon that I make an impact.

“Of course it has been a difficult time but I have just been working away trying to get my fitness back up.

“It is unfortunate that Albian (Ajeti) got injured and gave me my chance to come back in, I took my chance and I now I need to build on it.”