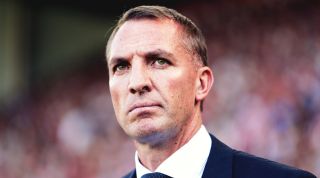 Leicester City have agreed a £22m deal for Atalanta defender Timothy Castagne - but Brendan Rodgers is keen to add more players to his thin squad before the transfer window closes.

Castagne, a Belgian international, is a right-back capable of playing on the left. Though he's more used to playing in a back three than a back four, Rodgers sees him as an ideal candidate to bring attacking thrust and dynamism to his Foxes side, and his versatility means that he adds much-needed depth to the squad.

“I like Leicester's style of play which should suit me," Castagne told Belgian radio about the deal. “And the feeling with the manager is very good, he contacted me regularly."

The 24-year-old is set to be announced as the club's first summer signing but is currently on international duty - along with fellow Foxes Youri Tielemans and Dennis Praet.

BRENDAN RODGERS “European football was the aim”: A year after taking the job, Rodgers explains his new ambitious plans for Leicester

Rodgers doesn't want to curb the spending just yet, however. Rumours are intensifying about a deal for Burnley's Dwight McNeil, who Leicester see as a solution to inject a little more creativity into the side.

With much of the creative burden last term falling on the shoulders of James Maddison, Rodgers is keen to sign another player who can help forge chances for Jamie Vardy. With the centre of the pitch stocked at the King Power Stadium - Maddison, Tielemans, Praet and Ndidi are the first four choices when everyone's available - Leicester see signing another wide man as the best move.

Ayoze Perez has had an inconsistent start to life in the East Midlands, while Demarai Gray has failed to live up to expectations. Given that McNeil could yet be moulded into a left-back, the move would make even more sense, as the 20-year-old could become the replacement for Chilwell.

Leicester also retain an interest in Norwich City's Jamal Lewis, who was priced out of a move to Liverpool and could be the answer on the left of defence.

Brentford's Bryan Mbeumo is a reported target for the Foxes in an attacking position, while Said Benrahma is a more high-profile name from the Bees who would thrive in Brendan Rodgers' possession-based system. Ollie Watkins, however, looks to be on the way to Aston Villa.

Odsonne Eduoard from Celtic looks to be another possible option in attack, but Arsenal are also keen on the striker to replace Alexandre Lacazette.