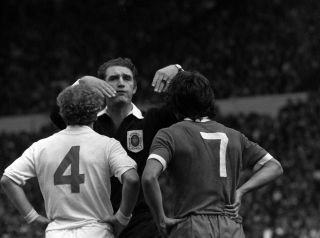 Leeds’ visit to Liverpool on the opening day of the new Premier League season will rekindle an intense rivalry which famously bubbled over at Wembley one afternoon in 1974.

Brian Clough’s league champions met Bob Paisley’s FA Cup winners in the Charity Shield on August 10 with Don Revie and Bill Shankly, the men who had established their respective clubs as powerhouses in the domestic game, having handed over the reins during the closed season.

Liverpool emerged victorious after a penalty shoot-out in which Leeds goalkeeper David Harvey had missed his side’s sixth attempt to hand Ian Callaghan the chance to win it, but the game will always be remembered for the second-half dismissals of Billy Bremner and Kevin Keegan following an ugly brawl.

Eddie Gray, who lined up alongside Bremner that day, told the PA news agency: “I remember Billy getting a crack from Kevin Keegan and it was actually nothing to do with Billy.

“I think Kevin Keegan thought that Billy had fouled him, but actually it wasn’t Billy, it was Johnny (Giles) who had, but Billy got the brunt of it from Kevin and a little scrap happened and the two of them were sent off.”

Both men removed their shirts in disgust after receiving their marching orders from referee Bob Matthewson and were later handed 11-game bans and £500 fines, remarkable punishments in an era when on-field discipline was perhaps policed less stringently.

Gray said: “You used to get quite a lot of skirmishes in those days. That was how the game was played then. There was no quarter asked or given, that was the type of game it was.”

Leeds and Liverpool competed for the English game’s top honours and prospered in Europe for a decade or more as Revie and Shankly built fine sides, the Reds getting the better of the Yorkshire side in the 1965 FA Cup final courtesy of Ian St John’s extra-time winner.

However, it is a 0-0 draw at Anfield which clinched the 1969 league title for Revie’s men which sticks in Gray’s mind.

He said: “There were some good moments in the games over the years between the two clubs, but from the Leeds United point of view, winning the club’s first league championship and it actually happening at Anfield stands out.

“Don Revie told us to go and march towards the Kop and take the applause from the Kop. We thought he must be crazy, but we did and they all started chanting as we were walking closer and closer, ‘Champions’, so that was a great moment.”

The current Leeds team could hardly have landed a tougher assignment for their first weekend back in the Premier League after a 16-year absence, but Gray is confident they will make their mark at Anfield and beyond.

He said: “I think they’ll be equipped to compete in the Premier League. I’m not saying they’ll be challenging for anything next season, but I think they should feel quite comfortable in themselves that they can finish in mid-table, top-half of the table.

Meanwhile, Leeds confirmed on Thursday afternoon that they had accepted an FA charge brought after players lit flares on the pitch at Derby as they celebrated promotion.

A statement on the club’s official website said: “Leeds United can confirm that we have received a charge from the FA regarding a breach of FA Rule R20 during our game against Derby County.

“The club has accepted the charge.”