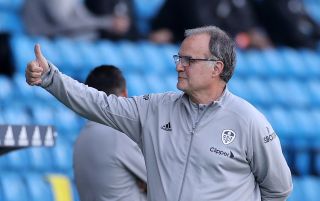 Marcelo Bielsa has expressed his full admiration for the work of Sheffield United manager Chris Wilder.

The two sides clash in the Premier League’s first Yorkshire derby in over 19 years at Bramall Lane on Sunday, and the Blades’ progress under Wilder has earned Bielsa’s full respect.

“The way that he manages to set up his team awakens interest in me to learn from him,” said Bielsa.

“After their very good season in the Premier League, it shows that we’re going to be up against a team that is very well prepared.”

The Blades have yet to register a point after successive defeats to Wolves and Aston Villa, but last season’s top-10 finish impressed Bielsa.

“It’s very clear the importance of what Sheffield United have done,” said the Argentinian.

"What football plays in this part of the world is huge."— Sheffield United (@SheffieldUnited) September 25, 2020

“First getting promoted and then the season they have just had in the Premier League.

“They are a team with a particular style of play, which is ingrained and well-oiled, and they have a very, very good manager.”

Wilder guided the Blades from Sky Bet League One to the top flight in three years and has largely kept faith with the same group of players.

“He’s been able to ingrain his ideas into his players and they clearly feel comfortable in the system that is being imposed,” Bielsa said.

🙌 Today we compare the stats of #LUFC midfielder, @Cli5hy, to #SUFC's John Fleck, ahead of their clash this weekend. 👇 #PL#MOT@BerrysJewellerspic.twitter.com/NsRpTrLWop— Leeds United StatZone (@lufcsz) September 25, 2020

“This is one of the virtues of a good manager and coach, someone who’s able to ingrain his ideas on his players to make it look comfortable.

“They are a practical team, very difficult to face, and I feel the game on Sunday is a big challenge for us.”

Leeds midfielder Pablo Hernandez remains two weeks away from a return to action after a groin strain, but Bielsa has no new injury concerns.

Bielsa said new signing Diego Llorente was available to play, but it remains to be seen if he will be included in the squad after completing his £18million move from Real Sociedad this week.

“But it is true that this week has been atypical for him and he will need to meet his team-mates and adapt a little bit more.”

Bielsa added: “There is likely to be a couple more incorporations into the team, but in the case that they don’t come we will adapt.”

– Promising Leeds midfielder Alfie McCalmont has joined Oldham on loan for the season.