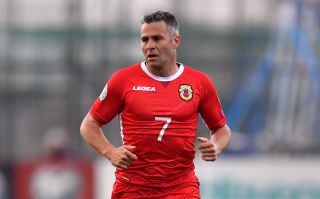 Lee Casciaro recalled his best day in football after Lincoln Red Imps were drawn at home to Rangers in their Europa League qualifier.

The 38-year-old Gibraltar striker scored the only goal of the game when the Gibraltarian minnows shocked Celtic and the rest of Europe in their Champions League qualifier at the Victoria stadium in 2016, albeit the Hoops turned the tie back in their favour at Parkhead with a 3-0 win.

Steven Gerrard’s side will travel to Gibraltar for the one-off  second qualifying tie on September 17 and Casciaro is “over the moon”, despite admitting that an Old Firm double is improbable.

He told PA news agency: “It is a dream come true once again for us.

“The Celtic game was a remarkable day for us. It was one of those days when everything went for us.

“We did a really good job and luckily got a goal and a result nobody would have thought would have happened. It was the highlight of my football career.

“People still talk about my goal and now we have a game against Rangers, probably the talk will start that we can match what happened on that day.

“It is difficult to put into words what it meant and how we managed to get a result.

“It was just one of those dream goals that you get once in your lifetime and luckily for us it was a 1-0 win over Celtic in Gibraltar.

“This time around it is a one-legged match and if we get a result here it would probably be the biggest upset because we would go through.

“But I believe that Steven Gerrard will be much more concentrated and focused on doing the job before arrives, he will analyse us and put pressure on us.

“It will be harder than playing against Celtic because Rangers are four or five games into the league and will be fitter. When Celtic came over then it was their first game  of the season.”

Casciaro also noted that Rangers beat St Joseph’s 10 -0 on aggregate when they faced the Gibraltarian side last season.

He said: “Playing in Gibraltar, the artificial pitch, the weather, everything is going to be against them.

“Football is about chance and luck and if we create chances and get a goal and defend properly they will find it hard to break us down.

“But Rangers is a team that should get through against us.

“It is hard to even think about it (victory) because they beat St Joseph’s 4-0 here last year and 6-0 at Ibrox.

“We know it is going to be a hard game, we know we need to have luck and if we managed to get a result it would be one in a thousand.”