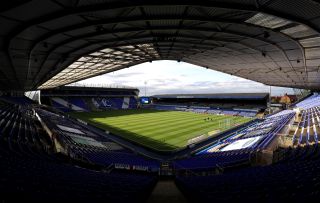 Aitor Karanka failed to inspire Birmingham as League Two side Cambridge produced a Carabao Cup shock with a 1-0 victory at St Andrew’s.

Karanka has replaced fellow Spaniard Pep Clotet as head coach at Birmingham with high hopes of a big improvement.

But the former Nottingham Forest and Middlesbrough manager’s new side made it 16 games without a win after Cambridge debutant Robbie Cundy’s first goal in professional football.

After a low-key start in which Cambridge midfielder Luke Hannant’s shot that flew well over the bar was the only action, the visitors took an 18th minute lead with the first serious attack of the game.

Centre-back Cundy planted a towering header into the empty net from Hannant’s free-kick after a blunder by debutant goalkeeper Andres Prieto, who got nowhere near the ball after coming off his line to collect.

The Us finished 16th in League Two last season – 44 places behind Birmingham, who were 20th in the SkyBet Championship – and had not played in nearly six months.

But they were more than a match for Birmingham in the first half and produced a determined defensive display in the second.

Blues tried to get back on level terms and they were unlucky when Jeremie Bela’s thumping rising drive from 25 yards crashed down off the bar in the 27th minute.

Soon afterwards, Birmingham midfielder Ivan Sunjic should have done better when space opened up for him to shoot, but his wayward effort flew high and wide from the edge of the box.

Prieto, who signed from Espanyol, and defender George Friend, who joined from Karanka’s former club Middlesbrough, were two of six new arrivals this summer, but there was little of the new broom under the Spaniard in a tie that failed to ignite.

Blues had much of the play in the second half but failed to test goalkeeper Dimitar Mitov.

In the end, Cambridge had little trouble preserving their lead as they eased through the rest of the game and four minutes of time added on into the second round.