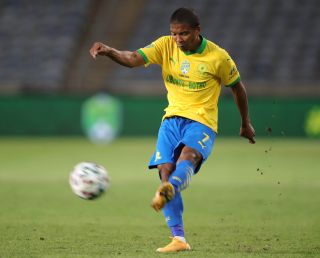 Mamelodi Sundowns left back Lyle Lakay has revealed what he learned from veteran players Tebogo Lenagerman, Denis Onyango, Hlompho Kekana and Anthony Laffor during their time at SuperSport United.

The 29-year-old joined Sundowns from Cape Town City in 2018 and has already managed to feature 76 times, while bagging four goals and assisting a further eight to date.

He has already won four trophies with Sundowns, including two Absa Premiership titles, a Telkom Knockout Cup trophy and the Nedbank Cup title

Lakay says the likes of Sphelele Mkhulise, Keletso Makgalwa and Promise Mkhuma should following in his footsteps and learn from the more experienced players in the squad.

‘I have played with Tebogo Lenagerman, Denis Onyango, Hlompho and Anthony Laffor at SuperSport and for me as a youngster back then, it was all about learning from the senior players, doing whatever they were doing to succeed because it is evident with what they have achieved,’ Lakay told the media.

‘When I speak to the youngsters at Sundowns, I tell them that I was the youngest in the SuperSport team when I got to the senior team.

‘There was Daine Klate, [Ricardo] Katza, David Kannemeyer, Siyabonga Nkosi and all other experienced players.

He added: ‘In order for them to succeed, they need to do what they have been doing.

‘If you look at the way they performed in the bio-bubble, they helped the team a lot and I think it is evident that Sundowns have a bright future with the youngsters and hopefully we can continue with the success.’