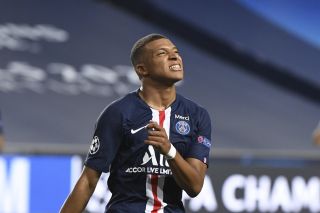 Mbappe was being pursued by Europe’s top clubs in 2017 after his goals helped Monaco win the French title and reach the last four of the Champions League.

Instead he opted to move to the French capital in a mega-money switch which made him the world’s most expensive teenager.

Now the 21-year-old is one match away from lifting Europe’s most prized trophy, wth PSG taking on Bayern Munich in Sunday’s final in Lisbon.

“That is exactly the reason I joined the club,” Mbappe said at the pre-match press conference.

“I always said I wanted to write the history of French football. I have another opportunity to do that tomorrow.

“Since I joined in 2017 we have experienced a number of disappointments, now we’re in the final and that showed I didn’t give up and nor did we give up as a team.

“It would be a real reward if we could win the competition with a French side. That was my mission when I joined.”

The coronavirus pandemic meant the format of the competition had to be adapted with one-legged ties and no supporters in the stadiums.

“We’d have liked our fans to be here, we know they’ll be cheering us on wherever they are but it’s still the Champions League, you can see the tempo of game.

“It is behind closed doors but still a great atmosphere inside the stadium.

“You can really feel it; everyone wants to win the competition. It’s a unique format but one we’ll remember. We’ve been struck by a tragedy. This competition will go down in history.”

While PSG are looking for a first Champions League title, Bayern Munich are going for their sixth.

PSG boss Thomas Tuchel said: “In this competition it is a slight advantage for Bayern Munich in that they’re used to being involved in finals such as this one. However, that won’t be a decisive advantage.”