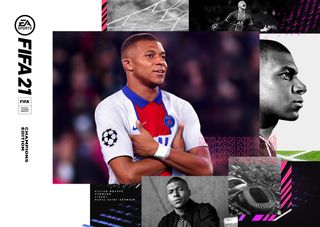 Fierce debate rages every year about which footballer will front the next edition and fans can finally excited about the new release after the big reveal on Tuesday.

EA called Mbappe "one of the game's brightest stars" and described the PSG and France forward as a player who "embodies the spirit of the global FIFA community through his dedication to growing the culture of football and connecting the beautiful game with millions around the world."

It's been a rapid rise to this stage in Mbappe's footballing career. The 21-year old has scored World Cup-winning goals, won league titles, was named Golden Boy in 2017, and won Ligue 1 Player of The Year at the age of 20. He signed his first professional contract in 2016.

“Being on the cover of FIFA is a dream come true," said Mbappe, following the announcement. "From my time at Bondy to Clairefontaine to the World Cup, this marks another big milestone. I’ve been playing this game since I was a kid and I am honored to represent a whole new generation of footballers and be in the same group as many other amazing footballers who I now share this honor with.”

• Pre-order FIFA 21 Champions Edition for Xbox One for £79.99 – from Argos, or from Amazon, delivers October 6