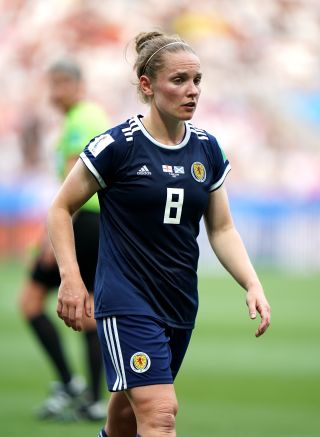 Scotland international Kim Little believes Glasgow City’s journey to the last eight of the Champions League is “key” to the growth of the women’s game in the country.

Scott Booth’s team – who will face German champions Wolfsburg in San Sebastian on Friday – are in the quarter-finals alongside Little’s own club, Arsenal.

And the 30-year-old midfielder, who started her own career at Hibernian, told the PA news agency: “The game in Scotland is very much in a progressive stage.

“It’s not professional but there is definitely more input now from teams like Celtic and Rangers to push that.

“I think Glasgow City have been within the Champions League and also in the later stages for numerous years now, which is obviously key to the women’s game in Scotland.”

Glasgow City, who play their home games at Petershill Park, have been the dominant force in Scottish football for more than a decade. They have landed 13 consecutive league titles.

Their clash with Wolfsburg will be their second quarter-final appearance, with the last coming in 2015.

The following day, Arsenal take on Paris St Germain in San Sebastian and Lille added: “I think it’s obviously great to have another representative from the UK and I think even from previous years with Chelsea and Man City as well.

“We’ve had a good mainstay of British-based teams all the way to the semis and maybe we’ve just missed out on a final, but we hope we can make it that one step further this year.”

:: Little was speaking to the PA news agency as a member of Team VISA as part of VISA’s efforts to futureproof women’s football and grow the game.