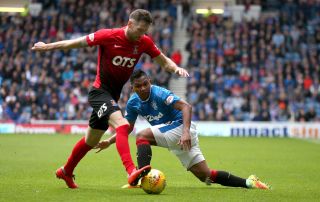 Kilmarnock defender Kirk Broadfoot fears Rangers will be more dangerous than ever after being released from the shackles of the Ibrox boo boys.

The Govan atmosphere during Old Firm clashes and big European nights is famed for its rousing effect on the home team.

But having 50,000 empty seats has made little difference to Steven Gerrard’s team so far this campaign, with the Light Blues racking up successive 3-0 wins over St Mirren and St Johnstone.

Gers return to Glasgow on Saturday as they host Broadfoot’s Killie and the Ayrshire side will be looking to frustrate the Light Blues in the same way Livingston managed last weekend at the Tony Macaroni Arena as a goalless draw ended their 100 per cent record.

But the former Rangers defender knows from experience that while the Ibrox crowd can spur their team to new heights, they also have the tendency to cause weaker characters to shrink when things are not going so well.

Killie have played on those groans to deny the hosts victory four times from their last six trips to Ibrox but freed from that burden by the coronavirus lockdown, Broadfoot fears Gers will prove too strong in their empty stadium.

He said: “I’m not sure Sunday’s display gives us too much hope considering the way they’ve played at Ibrox this season.

“They’ve been really decent but it’s always tough at Ibrox. Rangers are a very good side who can take four or five off anyone on their day.

“We’ll try to make it difficult for them but whether it works or not, we’ll have to see.

“We’ll aim to frustrate them but I think having no crowd will actually help Rangers if I’m honest.

“I know from experience how the fans at Ibrox can turn on you if you are not one-up by the first half hour.

“The Rangers support are a demanding crowd. It’s like that for both sides of the Old Firm.

“When I was at Rangers, we eventually broke teams down and got the three points.

“So far this season, with no fans there to give them that big groan when things don’t go well, then I think they’ve been very good in the two home games I’ve seen. Right now they can hurt anyone.

“Rangers will want a reaction after last week but hopefully we can frustrate them like Livi.”

Alex Dyer’s team have taken just two points from their opening four games after being beset by a raft of individuals errors.

But Broadfoot says his side are not far away from finding a winning formula.

He said: “We’re not playing too badly. It would be different if we were playing rubbish.

“But we’re not. It’s individual mistakes that are killing us right now. If we cut them out, we’ll be OK.

“It’s a tough one to take for Ross as he was sent off at a point when he was playing well. He’s now going to miss a couple of games but these things happen.

“Stuart has made a mistake too but we all do. I’ve made plenty my whole career.

“It’s about how you react to them that matters. You have to learn from them and make sure it doesn’t happen again.”