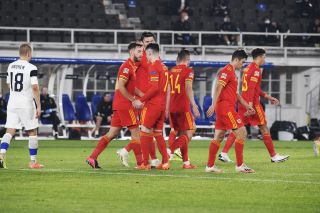 Wales opened their Nations League campaign with a 1-0 win against fellow Euro 2020 qualifiers Finland in Helsinki.

Kieffer Moore struck 10 minutes from time – his third international goal in six games – as he latched on to Daniel James’ inviting cross and rewarded Wales’ superiority at the Olympic Stadium.

The lack of pre-season training for both sets of players was evident and Wales captain Gareth Bale, making his first start since February, lasted only 45 minutes before being withdrawn at half-time.

But Wales called the tune for most of the night and deserved a third successive away win.

Wales came into their first fixture for nearly 10 months with a raft of injuries.

Aaron Ramsey – the two-goal hero when Wales secured Euro 2020 qualification last November – was missing, and the Juventus playmaker was joined on the sidelines by Chris Mepham, David Brooks, Joe Allen and Joe Rodon among others.

But Bale was there to lead a Wales side sprinkled with youth, and one which saw Manchester United midfielder Dylan Levitt make his debut alongside the inexperienced Joe Morrell.

The 19-year-old had just 90 minutes of senior football under his belt, coming in a Europa League tie in Kazakhstan last November.

Fellow teenager Ethan Ampadu lined up at the back away from his usual midfield station as Bale formed a familiar three-pronged attack with James and Moore.

Both teams took the knee before kick-off in support of the Black Lives Matter movement and Wales started in positive fashion and had the ball in the net inside four minutes.

James sped down the left and cut back onto his right foot to deliver a cross which Moore headed in, although the celebrations were immediately cut short as German referee Daniel Siebert had spotted a tug on Leo Vaisanen.

James found space again to set up a Bale chance which Finland goalkeeper Jesse Joronen just about shovelled to safety.

Finland were disjointed and an unforced error from Joni Kauko allowed James to burst through the middle and set up Bale for another shooting opportunity which drifted wide.

Kauko was soon involved at the other end to rifle home a low shot but the offside flag had long been raised as Joel Pohjanpalo had strayed too far forward.

Temperatures rose as both sides picked up cautions with Tim Sparv and Morrell going into the referee’s book.

The second half started without Bale, who had shown signs of rust with so little game-time over the previous seven months.

But Bale had been rubbing his thigh moments before the break and manager Ryan Giggs may have replaced his skipper as a precaution.

Finland should have taken the lead four minutes after the restart when Vaisanen, unmarked from two yards out, somehow managed to cannon his shot off a post when it was easier to score.

Wales were now on the backfoot but Moore started a quick counter-attack that ended with James rushing his goal attempt and the ball sailing harmlessly wide.

Neco Williams became Wales’ second debutant on the hour mark, the Liverpool full-back taking up an unfamiliar advanced position as the England-qualified teenager put to bed any issues over his international allegiance.

Williams was the 17th player to make his Wales debut under Giggs and he made a positive impression as the Dragons finished strongly.

Their good work was rewarded when the impressive James, shrugging off his Manchester United struggles, broke free and crossed for Moore to send Wales top of the group ahead of Bulgaria’s visit to Cardiff on Sunday.